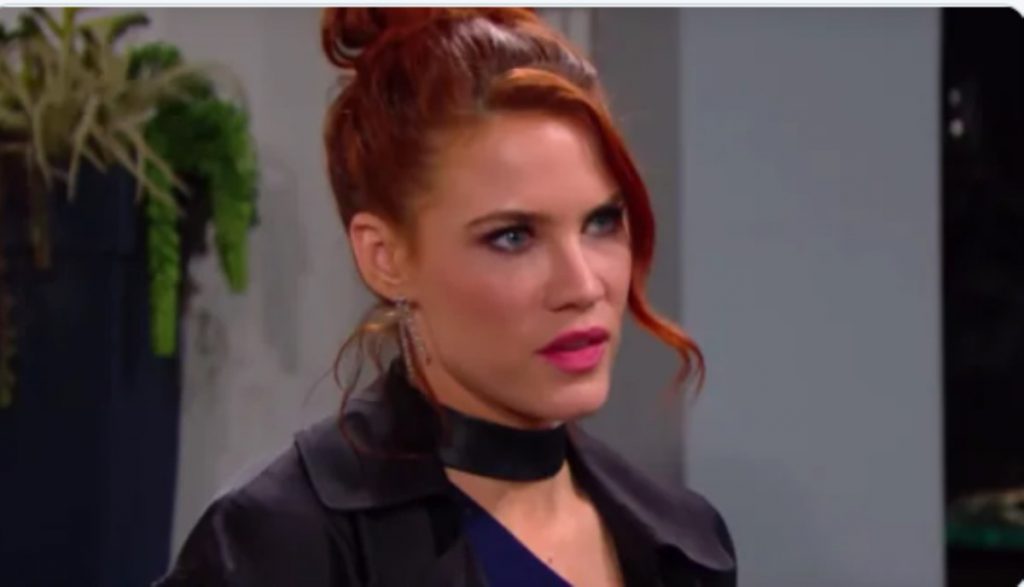 The Bold and the Beautiful spoilers for Friday, February 7, tease that Sally Spectra (Courtney Hope) will be dealing with a lot. As B&B viewers know, she’s currently waiting for test results that she hopes will tell her what’s been causing all of her harrowing physical symptoms. She’s been dealing with shaking, dizziness, and near-fainting spells for a while now, and she’s ready for answers, no matter how terrible they may be.

Well, according to B&B spoilers, Sally will be back to work at Forrester Creations on Friday’s episode, and she’ll get an unwanted visitor. The Bold and the Beautiful spoilers say that Wyatt Spencer (Darin Brooks) will show up at Forrester to check in on Sally and find out what’s going on. Wyatt has been feeling terribly guilty about hurting Sally by breaking up with her and telling her that he’s going back to Flo Fulton (Katrina Bowden).

But Wyatt also feels like he and Sally need to talk, because of how Sally handled the breakup. As B&B viewers know, Sally basically refused to break up with Wyatt, saying that they would work things out and that she didn’t want to talk about it further. And she’s subsequently been not responding to Wyatt’s texts and refusing to see him. Wyatt thinks that something must be going on, and he’ll probably want to talk about it when he shows up at Forrester Creations.

B&B Spoilers – Wyatt Spencer Gets Shut Down By Sally Spectra

But according to B&B spoilers. Sally won’t want to discuss things with Wyatt at all, and she’ll shut him down when he arrives at Forrester Creations. Now, whether Sally will have received any answers from the doctor about her health at this point remains to be seen. According to B&B spoilers, Sally will soon get a devastating diagnosis that will upend her life, but she might just be waiting for that diagnosis when she talks to Wyatt on Friday’s episode.

The Bold and the Beautiful Spoilers: Carter Warns Zoe That Thomas Is Using Her https://t.co/KpN4LUQZmt pic.twitter.com/IaI3R1Ey5w

Meanwhile, on Friday’s new episode of B&B, Bill Spencer (Don Diamont) will show his love for Katie Logan (Heather Tom) in a very overt way. As B&B viewers know, Katie has been doing a lot lately to help Sally through her serious health ordeal, but it wasn’t that long ago that Katie went through a nearly fatal health crisis of her own.

Katie was told last year that she was in complete kidney failure and needed a donor kidney to live. She nearly died when a suitable donor couldn’t be found, but thankfully Flo came through and donated one of her kidneys to Katie in a lifesaving move. Katie is truly thankful to be alive, and Bill and Will Spencer (Finnegan George) have been a big part of her off-screen recovery.

The Bold and the Beautiful spoilers say that Katie will spend some time with Bill on Friday’s episode that she’ll be overcome by his attentiveness and kindness. Of course, B&B viewers know that Bill hasn’t always been so nice. In fact, it wasn’t that long ago that he deliberately tried to break up Liam Spencer (Scott Clifton) and Steffy Forrester (Jacqueline MacInnes Wood), which ultimately led to some serious estrangement between Bill and Liam. He was similarly estranged from Wyatt for a long time, too.

But Bill has turned over a new leaf and is now the new and improved Bill, and he’ll apparently be in fine form on Friday’s episode, as Katie will be quite taken in by all the attention that Bill lavishes her with. We should see some nice “Batie” scenes, as the two spend time together and enjoy each other.

The Young and the Restless News: Cast And Crew Celebrate Another Major Milestone This Week