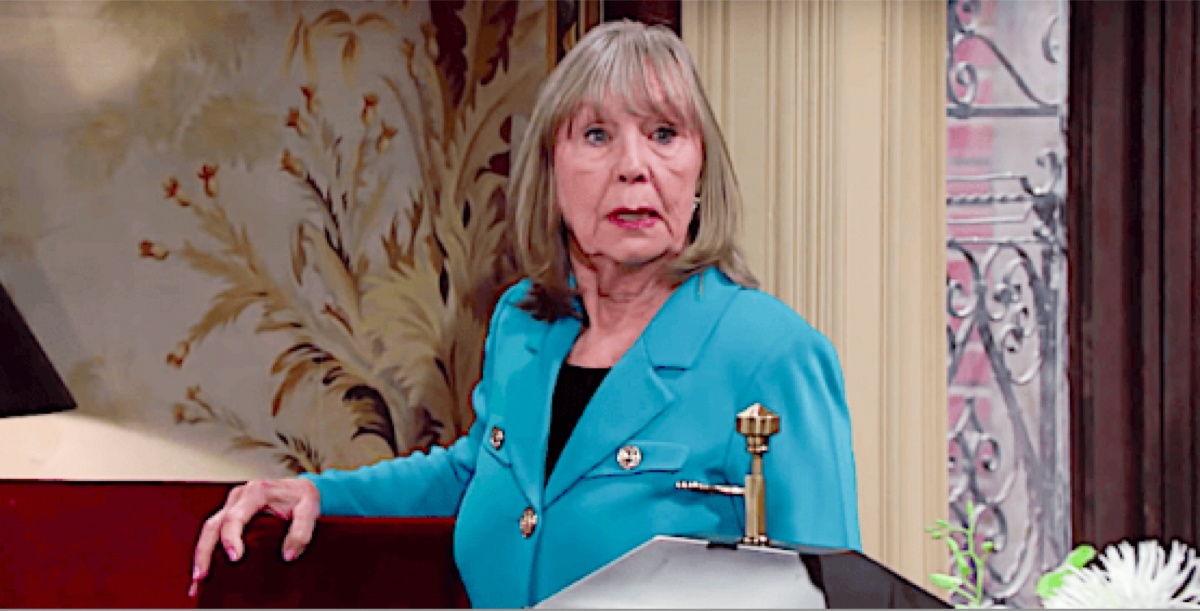 The Young and the Restless (Y&R) spoilers for Friday, February 28, tease that Victoria Newman (Amelia Heinle) will awaken at the hospital again. In her room, a groggy Victoria learns she’s been sleeping a lot.

Nick Newman (Joshua Morrow), Nikki Newman (Melody Thomas Scott) and Victor Newman (Eric Braeden) are there with Victoria, who wants to know who would hurt her like this.

After Nick and Nikki head out to the waiting area, they discuss Billy Abbott (Jason Thompson). Nick finds out Billy was on hand when Victoria first woke up and isn’t happy about it. Back with Victoria, she can’t remember what happened after she argued with Billy at the party. Victor wants Victoria to rest and focus on her recovery.

Once Victor’s in the waiting area with Nick and Nikki, he explains he didn’t offer up Ripley Turner (Christian Keyes) answers. Victor didn’t think it was a good idea since the psycho’s still out there. Nate Hastings (Sean Dominic) speaks with the Newmans about Victoria’s release, which can happen tonight. He can’t tell them how long Victoria’s full recovery will take, particularly when it comes to the emotional trauma she’s endured.

Afterward, Victor fills Nick in on Adam Newman’s (Mark Grossman) pitch regarding Newman Enterprises. Nick insists Adam can’t take charge, but Victor intends to hire anyone he wants. They bicker briefly, but Nick doesn’t want to get drawn back into that world. Once Nick struts away, Victor assures Nikki that he’ll come around.

At the Grand Phoenix, Abby Newman (Melissa Ordway) gets some somber news from Jack Abbott (Peter Bergman). Jack updates Abby on Dina Mergeron’s (Marla Adams) decline. She doesn’t have much of an appetite and sleeps more than she’s awake. Jack wanted to give Abby a heads-up so she’d be ready for what’s next. She’s worried for Jack and Ashley Abbott (Eileen Davidson) since this will be hard on them.

Abby trades barbs with Phyllis soon after. She complains about the lawsuits and doesn’t understand since they hurt Phyllis’ interest in the hotel. Phyllis brushes off the problem since she can take care of it. She just needs Abby’s shares, but Abby still isn’t willing to make a deal.

After Abby fires her attorney over the phone, Amanda Sinclair (Mishael Morgan) pipes up about helping. Abby doesn’t think Amanda can and points out it involves her pal, Phyllis. Amanda muses about Abby’s love for the hotel, so Abby acknowledges that she’s proud of herself. She’s accomplished a lot through the Grand Phoenix and doesn’t want everyone thinking Phyllis won.

The Young and the Restless Spoilers – Phyllis Catches Up With Amanda

Amanda suggests that it’s not about how other people see the situation. She thinks Abby should determine her own perception when it comes to winning. Afterward, Phyllis catches up with Amanda, who’s skeptical about the hotel is worth the battle. Phyllis counters that it absolutely is since she poured her heart into it. She rants about it being taken and doesn’t feel like Abby appreciates it enough.

Phyllis plans to make Abby’s life miserable until she achieves victory. Abby appears with celebratory drinks and reveals that she’s taking Amanda’s advice. She’s done and is handing over the shares, but she purchased the property across the street. Abby contends that by the time she’s through, the Grand Phoenix will look like a beach shack. Phyllis tells her to bring it, so Abby replies that it’s been brought.

At Adam’s penthouse, Chance Chancellor (Donny Boaz) talks about his plan to handle Phyllis. He wants to find the recordings and get rid of Phyllis’ leverage, which will mean getting into her place. Adam asks if Chance needs his help with that, but Chance doesn’t think so. He just wants Adam’s approval, so they shake on it.

At the Chancellor mansion, Chance presents Kevin Fisher (Greg Rikaart) with a job offer. Kevin is interested, but he questions if it’s legal. Chance brings Kevin up to speed on the recordings, which he assumes are on a laptop and a thumb drive. Since Kevin’s wary of this being a setup, Chance explains that it’s a legitimate private project. He promises nobody has to know Kevin was in on it and convinces him to get on board with a hefty amount of money.

The Young and the Restless Spoilers: Abby Gives Phyllis Her Hotel Shares, Jack's Bad News, and Victor and Nick Arguehttps://t.co/WcGQAzflqO

At Society, Jack calls Ashley to share the sad Dina situation. He advises his sister to head back to Genoa City. Soon after, Jack chats with Adam about Dina and eventually Victor. He hears about Adam’s potential comeback at Newman and supports it with conditions.

Jack wants to be sure Adam can handle Victor’s button-pushing and will let Victoria on the throne again when the time comes. He also suggests Adam should sit back and let Victor make the next move. The Young and the Restless spoilers say another hot episode’s coming up. We’ll keep you posted as other Y&R details emerge. Stay tuned to see what else is brewing on the CBS soap.