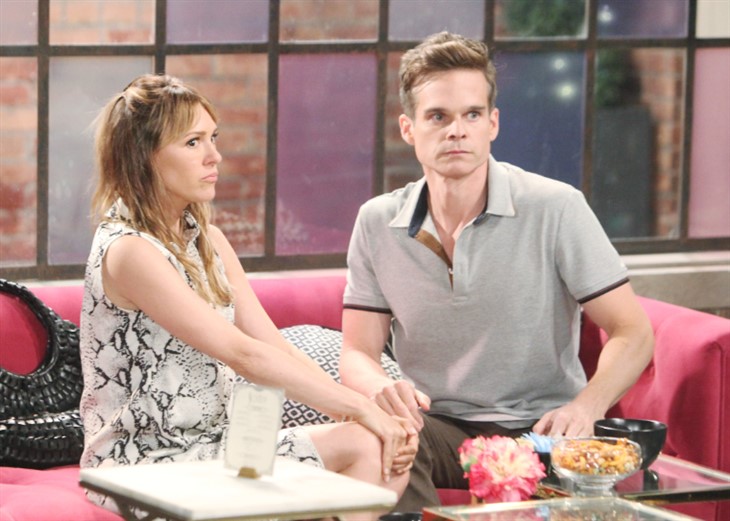 CBS The Young and the Restless spoilers document that Chloe Mitchell (Elizabeth Hendrickson) is ready to deliver. As fans see, Hendrickson’s character rushes down the Chancellor mansion stairs because she’s trying to avoid giving birth there. Chloe’s mother, Esther Valentine (Kate Linder), had her there many soapy years ago.

Khole’s long-awaited son, who seemed nearly ready to arrive in Genoa City, Wisconsin, in the spring, will be born in the fall. Kevin Fisher (Greg Rikaart) deserves total kudos for keeping his patience all these months. Surely the mother of the soon-to-arrive Khloe baby and the boy himself deserves more though.

Kevin and Khloe hadn’t been seen as regularly in recent times, so their return earlier this year was great. The development of a storyline that increases their family gives their first-born, Bella Mitchell (Martie Blair), a sibling, meaning that Khloe will be a foursome.

Of course the show’s only remaining debut year (1973) cast member, Linder continues to reign. Consider the actor’s longevity within this genre for a moment. Yes, she is absolutely one of the greats.

Y&R fans were thrilled when Hendrickson announced that her real-life baby, which was her and her husband’s first, was born back in March. She and Rob Meder welcomed their daughter, Josephine James, into the world.

Hendrickson’s imminent delivery affected the ability of Chloe to be on screen following the production shutdown. Full consideration for the actor’s safety, due to implemented safety protocols, later allowed Hendrickson to return to the cast approximately a month ago.

The Young And The Restless Spoilers: Victoria Goes Too Far – Nick Fears The Worst For Victorhttps://t.co/I6aNAhKC1p

The Young And The Restless Spoilers – Katherine Chancellor’s Well Wishes

Any event that takes place in the Chancellor mansion will always be missing the late Katherine Chancellor (played by the great Jeanne Cooper). Hardcore fans can only imagine the wonderful interplay that would have taken place between Esther and Mrs. C during the upcoming episodes.

However, life goes on, as the Grande Dame herself believed and is still surely thinking. And, Katherine is certainly blessing the latest birth that’s about to take place, with her good wishes offered from above.