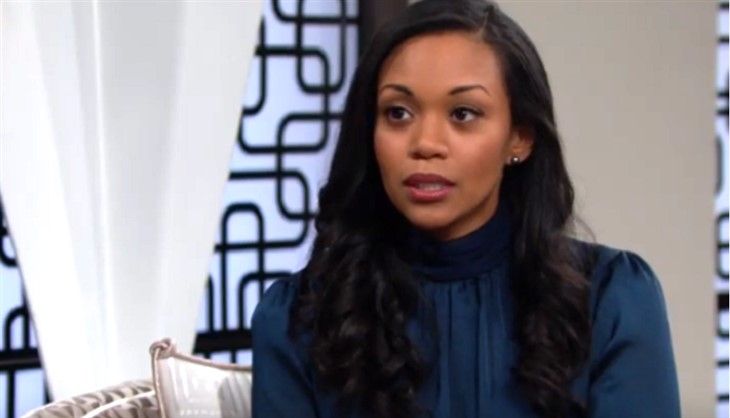 The Young and the Restless spoilers document that Amanda Sinclair (Mishael Morgan) learned that her birth mother is Naya Benedict (Ptosha Storey). Devon Hamilton (Bryton James) fittingly was the first person she shared that news with.

The reveal of Amanda and Hilary Hamilton’s (Morgan) mother as Rose Turner’s (Leslie Stevens) cousin answers one question. The private investigator located Naya, determined her family connection, as well as information about the circumstances that allowed Hilary to be taken in by Rose after her birth. As to why Amanda was put into the government system and wasn’t kept is something that needs to be determined.

The Young And The Restless Spoilers: All The Way Back To Rose Turner And Neil Winters

Y&R created the Hilary character in 2013. Initially she believed that Neil Winters (Kristoff St. John) was responsible for her assumed mother’s death, which was shown through period retrospective scenes that were said to have played out years earlier. Hilary believed Rose died from Neil’s negligence. But he left a room where they were drinking without realizing that Rose was suffering from alcohol poisoning.

The Young And The Restless Spoilers: Billy’s Big Choice – Fall Back With Victoria or Move Forward With Lily https://t.co/jwiY9ArvEi pic.twitter.com/C8Moe05wcB

Rose’s death drove Hilary (who was Ann Turner) to seek revenge against Neil and the Winters family. After all was revealed Neil forgave Hilary, who married him.

As soaps go, she fell for Devon, which Neil learned about while his impaired vision was being restored. The result was that Hevon became one of Y&R’s great couples of the last decade.

Amanda’s trip to Wilmette, Illinois, will provide the opening she needs to begin to resolve the natural questions she has about her early life history. Naya’s apparent position of wealth, at the time of her pregnancy with twins in college, doesn’t match her having surrendered Amanda without any seeming regard for that baby’s future.

The Young And The Restless Spoilers – Devon Hamilton Must Be Included

Devon didn’t hesitate in agreeing to Amanda’s request to accompany her to meet Naya. His connection to Hilary makes the ride he provides to Wilmette one that he would want to take.

However, viewers also see that Amanda’s milestone meeting with Naya is furthering her bond with Devon. That makes a Demanda pairing increasingly likely.