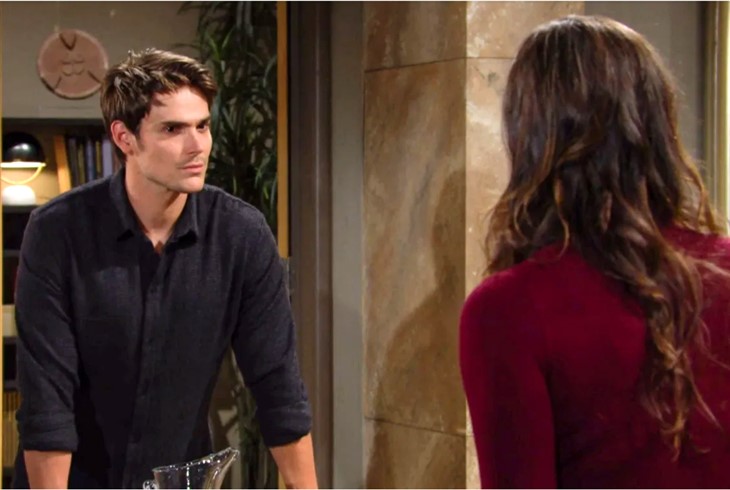 The Young and the Restless spoilers document that Adam Newman (Mark Grossman) made a huge blunder that appears to sink Chadam. There he was, big and bold as he normally pleases, trying to bait Rey Rosales (Jordi Vilasuso) at Crimson Lights. Adam didn’t accomplish what he wanted and didn’t know that Chelsea Lawson (Melissa Claire Egan) was listening at the doorway while his back was turned.

Generally, Adam wouldn’t have been written into such a foolish position. But he was, as Y&R seems to be writing the recast and reverse SORAS’d (soap opera rapid aging syndrome) edition of Adam in a different direction. Whether this path leads him back to Sharon Newman (Sharon Case) by New Year’s Eve remains to be seen.

Rey wasn’t provoked by Adam and didn’t respond as was hoped. Their distanced conversation, at the landmark setting that Sharon’s owned for a while, did result in Rey presenting the woman he hopes to marry with an exquisite engagement ring later that day at the Cottage, which was originally Shick’s first home. She put the rock on and then Shey set their wedding date for the last night of 2020.

It was clear that Rey is confident that Sharon is in love with him and that Adam is a fading threat. It’s not that Grossman’s character has been fully vanquished, as Rey knows Shadam’s history and Sharon’s recent desire to help Adam overcome his latest crisis. But there is a sense of certainty in the tone and demeanor of Vilasuso’s character that Adam now recognizes.

Let’s start with him not only disparaging his father but also Hope Wilson (Signy Coleman). The longstanding issues with Victor Newman (Eric Braeden) create the ability to at least understand why Adam always blames his dad for whatever problem appears.

However, tagging his saint-like mother, who was blind no less, with being at fault for the Kansas issue is abhorrent. Yet, Adam is even less self-aware and surely less self-critical than he’s been recent. That’s due, in part, to his realization that the women he relies on to take care of him are no longer accessible.

As she scornfully told him, Chelsea has stood by Adam in the worst of times. She defended his eternal victim personality type time and again.

Well, Chelsea finally had it. Hearing Adam say to Rey that he and Sharon would always find their way back to each other and then tell her (Chelsea) the lie that he was playing a game with Rey, when saying as much, was just too much.

The Young and the Restless Spoilers: It’s Only A Matter Of Time Before Billy And Lily Take Their Flirting To The Next Level https://t.co/Po6oVIJ8xj pic.twitter.com/N70QT6zrKk

Chelsea left the penthouse with one of her bags while leaving some others behind. Here’s hoping she doesn’t relent or get talked into staying with Adam, who doesn’t deserve to share one more meaningful moment of her life.

General Hospital Spoilers: Laura Wright Talks Doing Her Job and Being There For Her Co-Stars