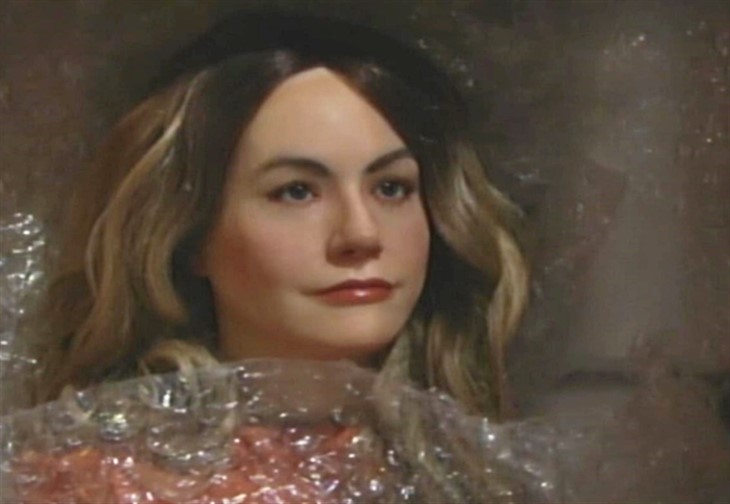 The Bold and the Beautiful spoilers document that Annika Noelle (Hope Spencer) is being featured in an unusual dual role on the Los Angeles soap opera. She continues to play the same TV character since debuting on B&B in 2018. But Noelle has also begun supplying the voice for an inanimate version of Hope that only Thomas Forrester (Matthew Atkinson) can hear.

The Hope doll storyline feels like a limited run event that will end badly for the ever-tortured persona that Atkinson kills in every episode. The sight of him with a mannequin, specifically during the period of time when fans know the actors are said to be recording scenes with said three-dimensional representations of various characters due to safety protocols, is equally intriguing, hilarious, and a well-delivered inside joke.

B&B’s actors are performing with their real-life spouses, or significant others, during romantic scenes. But, in some instances, executive producer Brad Bell said that mannequins would be used.

Considering the above, how clever it was for the writing staff to have Thomas, of all people, peer inside a box that Charlie Webber (played by the great character actor Dick Christie) delivered to the Forrester Creations’ main office. Then, to see Atkinson’s character hear Hope’s robotic, high-pitched voice telling him that she, the mannequin version, wanted to be with him was oddly intriguing.

Thomas bumped his head on the administrative assistant desk that Pam Douglas (Alley Mills) and Donna Logan (Jennifer Gareis) share. It would be hard to imagine that would evoke voices in Thomas’ head, but maybe that’s the plan.

Alternatively, it’s possible that a seemingly harmless event was a foreshadowing or a tip-off to what’s coming next. Thomas could be suffering from a previously undiagnosed medical condition, or has developed a malady that’s exacerbating his known stability challenges.

Let’s be honest, the Forrester family has not directly addressed Thomas’ psychological imbalance. That’s rather strange, considering that Taylor Hayes (Hunter Tylo) is world renown in that specialized field. So, possibly this developing storyline will result in Thomas getting the help he obviously needs.

The Bold And The Beautiful Spoilers – Increased Risk-Taking, Or Surprise Reveal?

Having Thomas develop a connection with the Hope doll could work for a while. But how intriguing would that be if that’s all the fans see for more than a handful of weeks?

So, Thomas will either have to take increased risks with the doll, meaning that he has it accompany him outside of Vincent Walker’s (Joe LoCicero) apartment, or someone finds him with the doll, or just the doll itself and provides a classic reaction shot. How about having the person the doll is based on be the one who lives this reveal?

The Bold And The Beautiful News: Katherine Kelly Lang Has Ideas About Redecorating The Forrester Mansion https://t.co/xiTikWHfZ0 pic.twitter.com/ApMC288Aam

Noelle, who’s delivered so many charged performances with Atkinson, has the chops to make that type of climax hit hard.