The Young and The Restless Spoilers: 3 Stupid Things Elena Does After Finding Out Amanda Is Hilary’s Twin 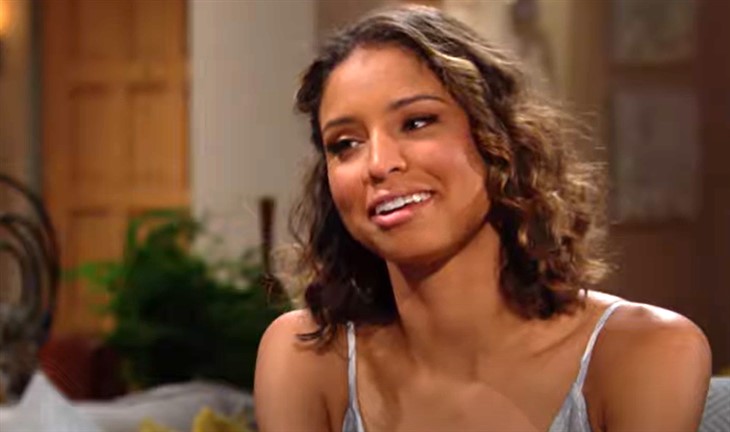 CBS The Young and the Restless spoilers tease that Elena Dawson (Brytni Sarpy) is acting like a deer in the headlights after finding out that a DNA test could bring the past life. This look is not a good one.

For months now she has had Devon Hamilton (Bryton James) all to herself. Together they have had good times and he seems to be all in as far as commitment goes. Now comes a silly DNA test to find out if Amanda Sinclair (Mishael Morgan) is related to Hilary Winters and level headed Elena is acting like a jealous teenager.
She needn’t worry because it would just be creepy if Devon got together with Amanda at this point. But she is human, and humans do silly things sometimes. What happens if the test results shock and amaze everyone and Devon especially has a knee jerk reaction?

There are plenty of stupid things Elena could do if the truth is revealed and it turns out that Amanda is Hilary’s twin; here are three of them.

The number one stupid thing that Elena Dawson could do if the DNA test results show that Amanda and Hilary are related is panic. It could be argued she has already done that, by acting timid and weak instead of the bold and beautiful woman that she is. How stupid could she get? Stupid enough to proposition the first guy who crosses her path which in all likelihood is Nate Hastings (Sean Dominic).

#2 Throws herself Into Her Work

Elena just isn’t acting like herself and this means she could find solace in her work. Many people turn to work to get their minds off more unpleasant matters and Elena is a hard worker. If she thinks that Devon could dump her for his ex’s relative, work is an easy, fast, and convenient mediator.

#3 Breaks Up With Devon Hamilton

Ok, I was wrong, the number one stupid thing that Elena could do isn’t to proposition some random guy—it would be to break up with her favorite guy!

We can hear the words now—she wants to let Devon find out for himself if there is something between him and Amanda so she’ll do the selfless and loving thing and set him free.

This is a common soap opera routine; will it happen to Devon and Elena? Tell us what you think Y&R fans!