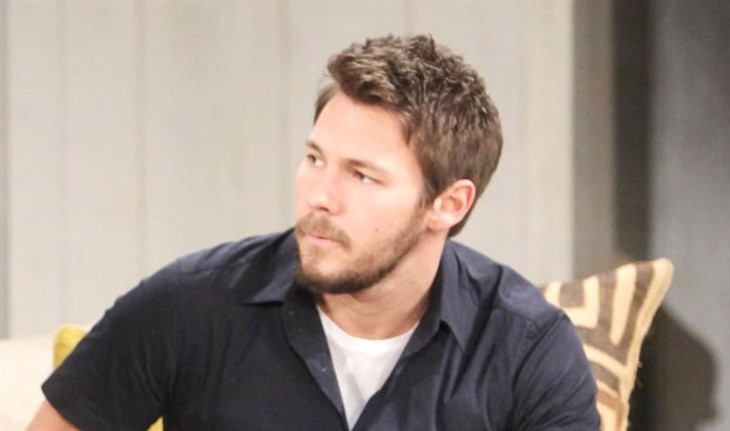 CBS The Bold and the Beautiful spoilers reveal that Liam Spencer (Scott Clifton) finds more pain pills while snooping at Steffy Forrester’s (Jacqueline MacInnes Wood). Liam is worried about her, so he goes to Ridge Forrester (Thorsten Kaye). However, Thomas Forrester (Matthew Atkinson) promptly shuts him down, claiming Liam is jealous of Steffy’s new man.

B&B spoilers reveal that while at Steffy’s house, Liam comes across a bottle of painkillers. He asks Steffy why she has more pain medication because he thought she was done taking them. Steffy dismisses Liam’s concern and lies, saying Dr. John “Finn” Finnegan (Tanner Novlan) wrote her another prescription. He starts asking even more questions, including why Finn would give her another refill when she should be taking over-the-counter pain relievers by now. Steffy will only say that Finn gave her more pills because she asked him to.

Liam keeps getting a nagging feeling in his gut about the pain pills and he’s not getting any information out of Steffy. He trusts that Finn would never do anything that would harm her, but he is worried that the doctor’s attraction might be clouding his judgment. Of course, he only thinks this because Steffy lied and said Finn gave her yet another refill of painkillers, which isn’t true.

Liam goes to talk to Finn, but it doesn’t appear he brings up Steffy getting more pain pills. Clifton’s interview with Soap Opera Digest didn’t mention that, just that Liam tells Finn that Steffy is vulnerable and has been through a lot. He then asks Finn to be careful with Steffy.

The Bold And The Beautiful Spoilers – Talking To Thomas Forrester

The Bold and the Beautiful spoilers reveal that Liam will try talking to Thomas about Steffy, but gets nowhere. Of course, Thomas isn’t Liam’s biggest fan. Not only did Hope Logan (Annika Noelle) marry Liam, Thomas isn’t thrilled about Steffy being in so much emotional pain because of him.

The Bold And The Beautiful Spoilers: Hope And Liam's Marriage In Trouble As They Disagree Over Kelly #bb #boldandbeautiful https://t.co/7Evuy2sZyc

So, then he goes to warn Ridge that his daughter might be in trouble. But when he begins telling Ridge about Finn giving Steffy more pain pills, Thomas comes in and interrupts. Liam immediately gets shut down by Thomas, who accuses him of being jealous of Finn.

Liam tries to explain that Thomas is wrong and he has nothing against Finn or Steffy moving on to another man. He tries to convey the message that he is genuinely concerned about his ex, but he is brushed off. If Steffy’s family isn’t going to even listen to what he has to say, then how will he help Steffy before it’s too late?

The Young and The Restless Spoilers: 3 Stupid Things Elena Does After Finding Out Amanda Is Hilary’s Twin