The Young And The Restless Spoilers: Sharon’s Focus Changes – Adam On His Own 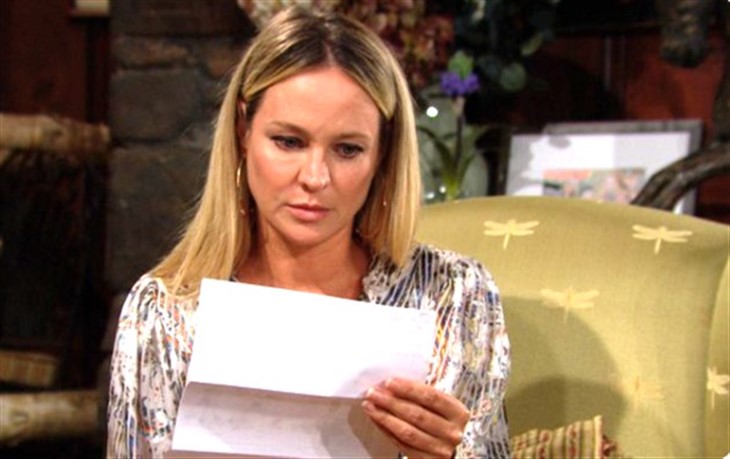 CBS The Young and the Restless spoilers document that Sharon Newman (Sharon Case) finally recognized that she must put her own health, not Adam Newman’s (Mark Grossman) well-being, first. That logical choice sidelined the understandable emotions that were recently stirred.

Shadam is a powerful part of Sharon’s past. But, as she was telling Adam in his motel room, life has moved on for both of them. They’re not a couple and can’t be overly involved in each other’s lives, or more to the point, she can’t serve as his crutch even if he thinks she should.

Adam isn’t using Sharon. He just sees her as a unique person who’s helped him in the past by offering forgiveness that wasn’t earned. Sharon’s compassion puts her in a special category.

The Young And The Restless Spoilers – Cancer Fight Persists

Chemotherapy treatments didn’t work as well as hoped. Then, surgery didn’t blunt this disease either. So, Sharon’s cancer fight hasn’t been won, yet.

Rey Rosales (Jordi Vilasuso), Mariah Copeland (Camryn Grimes), and many other loved ones and friends have been telling Sharon to take care of herself. She’s heard them all but has been trying to retain a semblance of normalcy in her life. To-date that meant acting in selfless ways.

Sharon has been Adam’s wife, his true friend, and, at times, has acted as a replacement for Hope Wilson (as most recently played by (Maggie Gwin). But beating cancer will require that Sharon avoids stress, which Adam represents.

Y&R Spoilers – Chelsea Lawson Is Half Of Chadam

Adam’s misguided belief that he’s a danger to Chelsea Lawson (Melissa Claire Egan) and their son, Connor Newman (Judah Mackey), led to him leaving the penthouse. He warned Chelsea that would happen, so it wasn’t a surprise. But not letting her know where he was going was wrong.

Chelsea is the woman he should be relying on at this time, not Sharon. And using Case’s character as a personal therapist was reckless, even though results were realized.

It took a lot of effort to revive Chadam and both halves of this couple know that Connor benefits by having his parents together and in love. But is Adam more in love with Sharon, than Chelsea? That’s a hard question to answer, based on his chaotic state of mind.

The Young And The Restless Spoilers: 3 Reasons Why A Victoria And Theo Hook-Up Would Be Excitinghttps://t.co/2PeZht1AIS

Paying what amounts to hush money to a woman in Vegas, who’s actually a widow and doesn’t appear to know it, isn’t right. Adam convinced himself that he had that situation handled and has been telling Chance as much for many months.

Alyssa Montalvo’s (Maria DiDomenico) return to town openly signals that the crime Adam and Chance committed in Nevada, in not reporting the death of the man who was killed in claimed self-defense, will soon be addressed. Adam will need to stop his self-loathing, as Sharon rightly termed it, and deal with the consequences of his actions. He owes that to Chelsea, Connor, Chance, Sharon, Alyssa, and the widow of the man he’s been paying off.