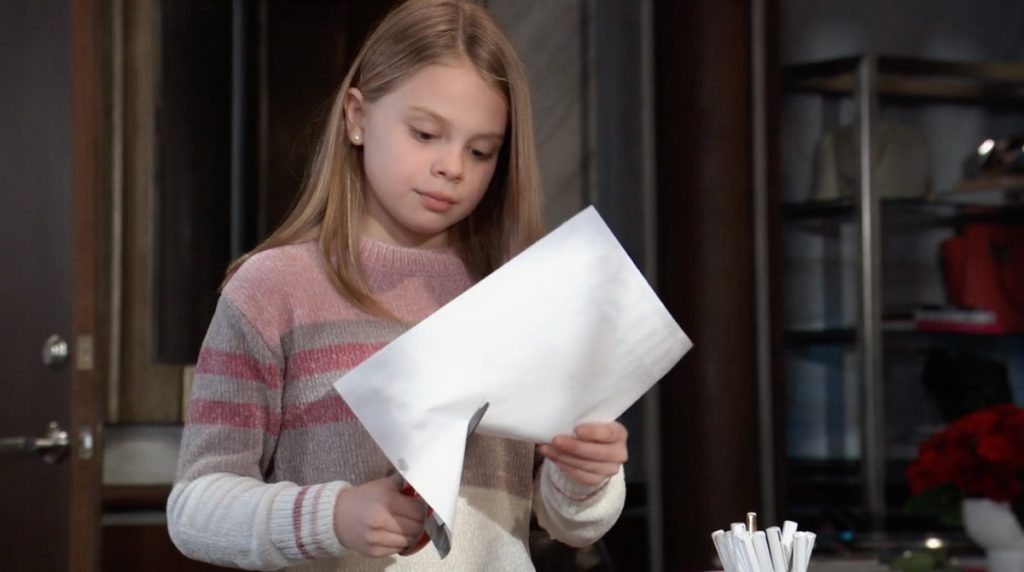 General Hospital spoilers for Thursday, January 23 tease another exciting day of drama for General Hospital viewers. Viewers in the US, please be advised your program may be interrupted by the Trump impeachment trial.

Lulu Spencer (Emme Rylan) comes to pick up Charlotte Cassadine (Scarlett Fernandez) from the Crimson office where she was in the care of Nina Reeves (Cynthia Watros). Lulu finds the mock-up cover for the Deception ll article with the photograph of Sasha Gilmore, (Sofia Mattsson) cut to pieces. She asks her what happened; Charlotte blamed Nina! It sounds like Charlotte is having some serious problems by the way she is acting out!

Nikolas Cassadine (Marcus Coloma) and Ava Jerome Cassadine (Maura West) are flying back to Port Charles, where Nikolas had a huge falling out with Spencer Cassadine (Nicolas J. Bechtel), the reunion not going the way he hoped it would at all! Ava brings up the post-nup he is supposed to sign in exchange for the codicil. Nikolas agrees to sign it with a condition – that she plays the part of being his doting wife and to be faithful to him so that he will not appear weak.

On the docks, Josslyn Jacks (Eden McCoy) has an idea and advice for her older brother, Michael Corinthos (Chad Duell) about Wiley Cooper-Jones (Erik and Theodore Olson). She advises him the whole problem of Nelle Benson Archer (Chloe Lanier) being around Wiley, and the problem of Brad Cooper (Parry Shen) not being able to care for him adequately on his own could be solved if Willow Tait (Katelyn MacMullen) revoked the adoption and took him back.

Michael advised her that was not able to legally happen since the papers were all signed; even though birth mothers sometimes do sue for custody to get a baby back, it had been finalized. She tells him perhaps she should think, as Wiley’s godfather, what Lucas Jones (Ryan Carnes) would want him to do.

At the Metro Court, Willow is upset as she sits at a table with Sasha and talks things over. She is worried about Brad’s competency to keep caring for Wiley, and Nelle’s presence around him as well. She has had a couple of brushes with “Nasty Nelle” now and knows that her presence is dangerous for Wiley. Willow tells Sasha there is no way she can be ok with Brad raising Wiley on his own!

Carly Corinthos is very irritated at Nelle’s constant taunting of her in another part of the Metro Court restaurant. She knows that Nelle is trying to get on her last nerve and bring up pain over her grandchild’s assumed death as she tells her in no uncertain terms to quit bringing up Jonah Corinthos’ name to her with a warning that she’ll see what happens!

At a restaurant in Brooklyn where Mike Corbin (Max Gail) used to hang out back in the day. They discuss plans for Mike and also the meeting they set up with the Five Families so no one would get antsy about their being in this restaurant which is apparently a mob hangout at times. Sonny tells Jason there can’t be any incidents, and that this has to work!

Days of Our Lives Spoilers: Kristen’s Heartbreak Over Her Baby’s Death – Will She Now Find Out The Truth?