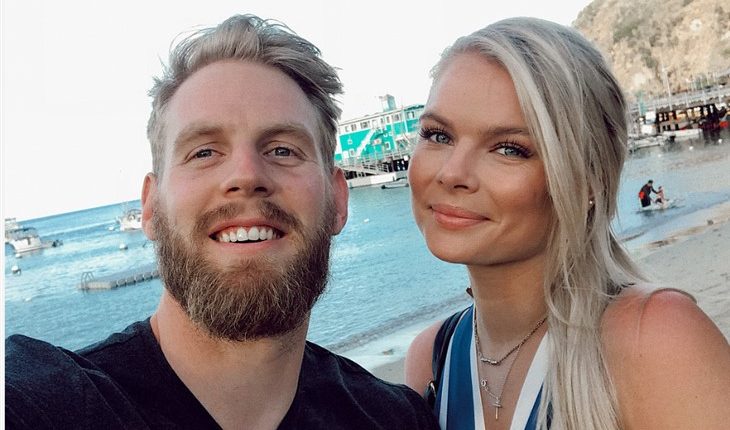 CBS The Young and the Restless spoilers reveal that a second Y&R alum has gotten engaged on the beach in recent days! First, it was Max Ehrich, who played Fen Baldwin, who announced his engagement to pop star Demi Lovato. This week alum Kelli Goss, who played Courtney Sloane, is sharing her engagement news with fans.

The soap alum debuted on the CBS sudser in 2013 and stayed until 2015. She has just told the world that after 6 wonderful years with her sweetheart Justin Wilmers, that they are now engaged. The exact date was July 29, according to the blonde star.

The pair began dating in 2014. According to his Insta, Justin is affiliated with UCLA Law. Goss has posted frequent pics of them together on her Instagram account and they have traveled throughout the country sharing many happy times together.

On her, Insta Kelli posted a photo of the beautiful pair standing on a beach with the sun setting behind them to announce her news. She is dressed casually in a white t-shirt and oversized beige sweater while Justin is sporting a long-sleeve gray shirt and a black puffer vest.

In another photo, Kelli proudly displays her engagement ring and it is a beauty! It is a simple and understated ring, with a sizable, single oval diamond set atop a gold band.

Young And The Restless Spoilers: Lily Returns Home for A Visit

The Young And The Restless Spoilers – Congrats To Kelli  Goss And Justin Wilmers And Max Ehrich And Demi Lovato!

It is great news to hear that two Y&R alums are so happy in love. Fans still remember both Max and Kelli with fondness and it’s nice that they have shared their terrific news.

The show has begun taping again following the coronavirus induced production shutdown. In March all four American soaps ceased production as the pandemic forced studios worldwide to close. The first new episodes from Y&R will air soon but it could not be soon enough for content starved fans who have waited patiently for the show to get back to work in a safe manner.

The Young And The Restless Spoilers: Victor Confronts His Dying Father – Sharon Sees A Familiar Face – Danny Returns To GChttps://t.co/r6vYhDEAW6

In the meantime, Y&R has aired encore episodes and we have seen many lovely characters once again grace our screen including the late fan faves, Kristoff St. John who played Neil Winters and Jeanne Cooper who played Katherine Chancellor.