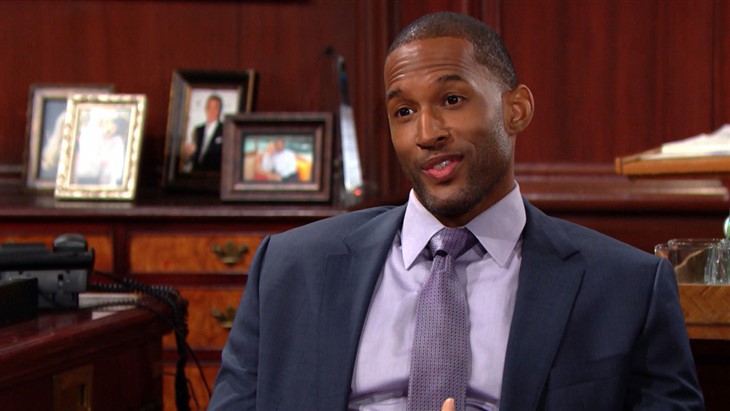 CBS The Bold and the Beautiful spoilers reveal fans will be seeing more of handsome and talented star Lawrence Saint-Victor as Carter Walton. It’s being reported that not only will Carter have more to do in the future, but he will also be romancing a lovely lady.

It’s being reported that Saint-Victor has been put back on a contract with the show and if that’s the case we will be seeing Carter cavort much, much more among the Forrester and the Spencers.

We haven’t seen him for a while except to perform the occasional marriage, divorce, or annulment. But now the rumor is that he may be getting involved in one or more of those very same situations himself!

Many fans have been asking for the thespian to return to the show in a meatier role and not that appears to be the case if indeed he has signed a contract.

Saint-Victor debuted on the CBS sudser in 2013. Head writer and executive producer Brad Bell recently spoke to Soap Opera Digest and said that the character will be seen more than he has in the recent past.

Apparently Carter will become involved in some way with Zoe Buckingham (Kiara Barnes). Bell noted, “It’s great to launch into another chapter with Zoe and to have Carter in the mix.”

Ironically, Carter had a front row seat to Zoe’s recent love mishap. She was all set to wed Thomas Forrester (Matthew Atkinson) when disaster struck. Thomas was only wanting a sham marriage and when his true love Hope Logan (Annika Noelle) showed up in a wedding dress he assumed it was to marry him. He told Zoe not to be sad, but she was his second choice!

The Bold And The Beautiful Spoilers: Friday, July 31 – Sally’s Rushed To The ER – Steffy & Liam Learn That Bill Caused Crashhttps://t.co/7vPSr0piyr

The Bold And The Beautiful Spoilers – Will Zoe Buckingham And Carter Walton Have A Happily Ever After, After All?

Zoe was hurt and Carter was supposed to perform the ceremony so he probably feels especially bad for the vixen. How bad? It seems that these two will have a lot to talk about in the near future, and after she gets over the sting of being left at the altar, might she realize what a good catch Carter is? We look forward to seeing the romance of Carter begin!