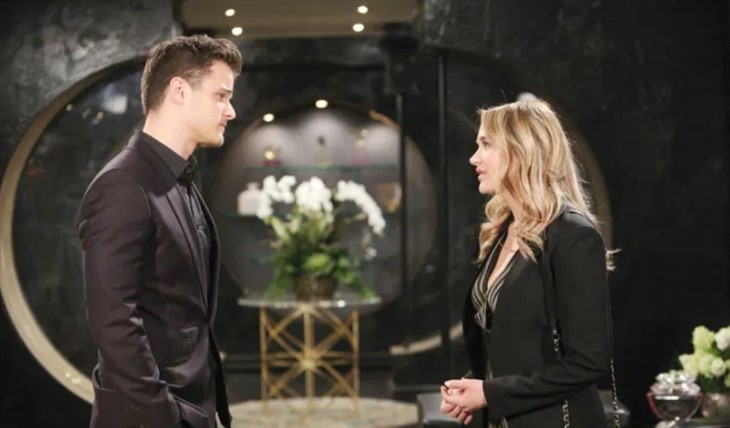 CBS The Young and The Restless spoilers tease that there may be a double wedding in the works for two couples on the show. Summer Newman (Hunter King) just got engaged to Kyle Abbott (Michael Mealor). Summer’s parents, Nick Newman (Josh Morrow) and Phyllis Summers (Michelle Stafford) have been reconciling for a while now.

Nick talked about getting a family gathering together weekly and planning for the future. Even though Phyllis freaked and Nick was shocked at Summer’s engagement, could a double wedding be in the works?

After Nick and Phyllis had left the park, Phyllis went back to work – The Grand Phoenix – and Summer is there. She’s wearing the engagement ring Kyle gave her on a chain for now, like a necklace. However, as mother and daughter are talking, Summer bends over to get something and Phyllis spots the rock! She goes ballistic, and reminds Summer how her previous marriages ended up!

Phyllis also reminds her that Summer had said she wouldn’t rush into anything. She was under the impression Summer was taking things step by step slowly and also reminded her Kyle was still a married man! Summer reminds her that she’s not a child – and of Phyllis’ own failed relationships. Phyllis maintains Summer should learn from Phyllis’ mistakes. Summer thinks her mother is projecting, and storms off into the spa. Nick, meanwhile was over at Society where he and his father talked about Summer and Kyle. Victor Newman (Eric Braeden) was also very worried about what his granddaughter was getting into.

Victor had given Kyle some serious warnings not to hurt Summer. After giving some advice about boarding schools to Adam Newman (Mark Grossman) who had dropped by to pick up lunch, Nick headed back to the Grand Phoenix. He then returned to Phyllis bearing a big bouquet of flowers. As he talked to her about making plans for the rest of their lives, Summer reappeared. Summer was upset and wanted to know if they were upstaging her engagement! Nick was blindsided – Phyllis hadn’t told him yet!

The Young And The Restless Spoilers: Sharon Not Done With Adam – Chelsea And Rey Kicked To Curbhttps://t.co/vCSNhfLvgL

Phyllis may be upset with Summer’s engagement now, but she should get over it. Both she and Nick want their daughter to be happy. Summer reiterates she’s happy with Kyle, and the Newman men are breathing down Kyle’s neck! That alone should ensure that Kyle toes the line and doesn’t misbehave! Summer reassured Phyllis that their engagement is being kept on the down-low.

It wouldn’t be good publicity for Jabot if it got out she and Kyle got engaged before his divorce became final, after all. Jack Abbott (Peter Bergman) would agree with that sentiment as well! Kyle has been put in a position to prove to the Newman men that he won’t hurt Summer again. The couple is getting a house together and Nick is handling the construction.

It seems strange that he’d be blindsided by an engagement. However, there is the fact that cohabitation does not allow for the division of property legally if the relationship breaks up. Divorce, however, does, and if Kyle and Summer rush into marriage, they may rush into divorce! Kyle and his previous wife Lola Rosales (Sasha Calle) didn’t even make it till their first anniversary! It is Kyle’s history that Nick and Phyllis are likely more worried about than Summer’s judgment!