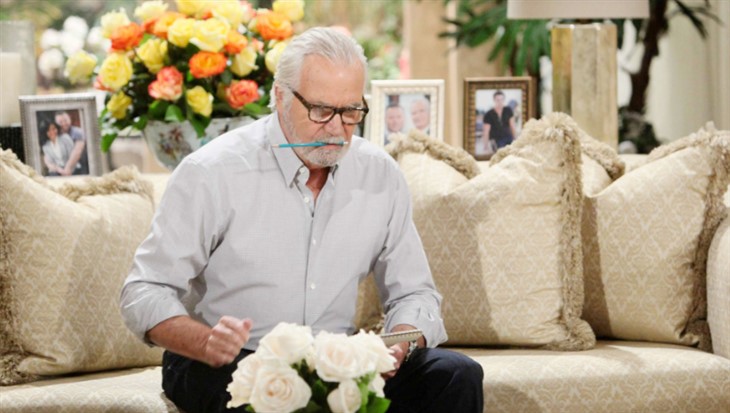 The Bold and the Beautiful is back to filming and is currently the only US soap that has returned to the set. However, there are strict safety regulations to protect the cast and crew. John McCook, who portrays Eric Forrester, explained what some of those rules are and how it affects everything about his job… including rehearsing lines.

The Bold And The Beautiful News Updates: Ratings Down – Can They Recover When New B&B Episodes Return?

New Bold And The Beautiful Spoilers – A Different Workplace

B&B stars are back at work, but it is a very different workplace than what they are used to. In the latest issue of Soap Opera Digest, McCook talked about how everything has changed so much due to the pandemic. He feels like he has been overseas due to how long he has been away from his co-stars. Even though everyone will be thrilled to see each other again, the actor stresses that it will also be an adjustment.

There has been a lot of talk on how soap opera sets, storylines, and filming must adjust to the new safety protocols. There has been discussion about creative camera tricks, social distancing, wearing masks, fewer people on set at once, and even using blow-up dolls in sex scenes. However, that is just the tip of the iceberg. The acting veteran explained,

“The rules and regulations that are being imposed on our workplace are incredibly rigorous — and rightly so. It’s going to be a very different workplace. It’s not just being out on the set with masks on, but we can’t run lines in our dressing room. You can’t have two people in a dressing room”

The Bold and the Beautiful star explained that 75 percent of his job is running through lines. He often rehearses with his on-screen wife, Quinn Forrester (Rena Sofer). So, if they can’t rehearse like normal anymore, then how do they deal with that? McCook says they need to find another place to go through their lines. Outside on the balcony or finding an open-aired space that isn’t being used.

As previously reported, actors will need to stay eight feet apart and the production team is six feet apart. In addition to social distancing, plastic dividers have been installed to protect the crew. Intimate scenes will be “split filmed.” Both actors will be away from one another with a central focus in between them. The one-shot is of one actor, then a separate shot is filmed of the other one.

They put those two together during the editing process. There are also spouses standing in romantic scenes. There also needs to be safe as the actors are saying their lines. COVID-19 spread through droplets expelled from the mouth and nostrils. People don’t realize how much microscopic-sized moisture drops are actually spewing out of their mouths when they speak.

The Bold and the Beautiful: Challenge Is Worthwhile Sacrifice. Even though McCook admitted that adjusting to all the new rules and regulations is challenging, he did clarify that it was a worthwhile sacrifice.

“It’s going to be an adjustment, but it’s a small sacrifice in the grand scheme of things.”