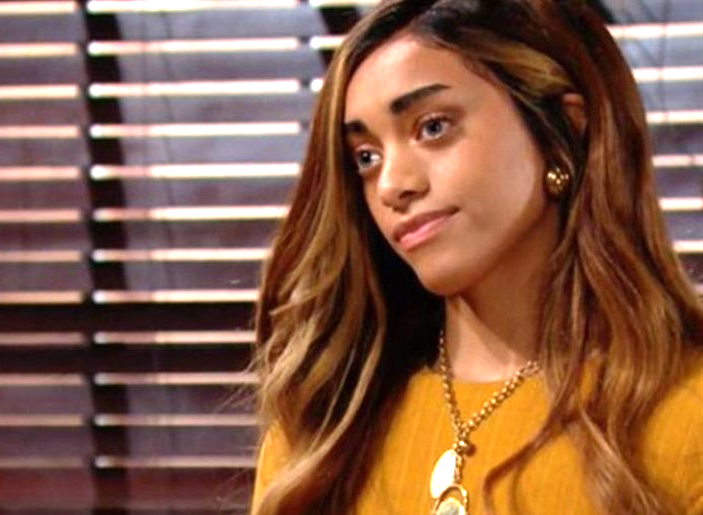 CBS The Bold and the Beautiful spoilers reveal that Zende Forrester Dominguez (Delon de Metz) shares his innermost desire with Zoe Buckingham (Kiara Barnes). When he does, the Los Angeles model belts out a song that she wrote just for him. Apparently, Zoe gets swept away at the moment, but will it also be the moment they are busted by Carter Walton (Lawrence Saint-Victor)?

B&B spoilers reveal that during the week of October 19, Zoe and Zende will continue to get closer. Unfortunately, Carter will remain in the dark and will keep giving his all when it comes to romancing the model. It is teased that the designer ends up sharing his innermost desire with Zoe.

Apparently, learning Zende’s innermost desire not only stuns Zoe but gets her caught up in the moment. She actually has already written a song about him and decides to share it. That’s right, she sings Zende a song and we are guessing it will tug at his heartstrings. But that isn’t all the two will share.

The Bold And The Beautiful Spoilers – ‘Kindred Spirits’ and Ignited Passion

The Bold and the Beautiful spoilers reveal that actress Kiara Barnes told Soap Opera Digest that the pair are “kindred spirits” and talk about everything. Not only are they sharing secrets, admitting private desires, and belting out songs, they will also discuss Carter. While Zoe opens up about how she really feels about Carter with Zende, it doesn’t appear that she tells the person she’s talking about. This is known because, in two weeks, Carter and Zoe will get intimate.

B&B Spoilers – When Will Truth Come Out?

It’s not known when the truth will come out. Soaps are famous for dragging out love triangles for a really long time. We know that in two weeks, Carter and Zoe sleep together. But with how much bonding and connecting is going on, it won’t be long before Zoe and Zende end up in bed with each other.

How long do you think this love triangle will go on for? When will Carter find out that he is being betrayed by both Zoe and Zende? We will have to keep watching the CBS soap opera to see how this story develops.