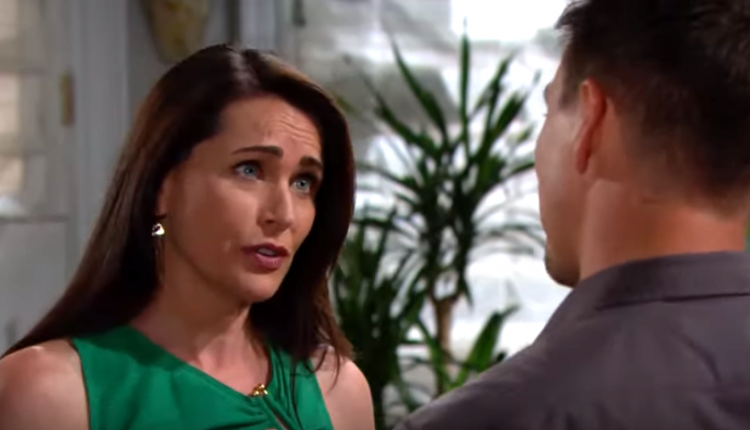 Wyatt Spencer (Darin Brooks) is fond of Sally Spectra (Courtney Hope) on ‘The Bold and the Beautiful’. He also feels sorry for his brief fiance and hopes that her life improves.

As B&B fans know and just read above, the word love never appeared in the previous two sentences. And that’s the point that Sally refuses to accept, as she disagrees with Wyatt’s latest breakup.

Wyatt’s conversation with his mother, Quinn Forrester (Rena Sofer), hints at what Brooks’ character wants for the future in this fictional version of Los Angeles, California. But Sally is exhibiting some unusual behavior that could represent a serious health problem or could link her to Wyatt forever.

Wyatt has been conflicted ever since he first saw Flo Fulton (Katrina Bowden). Actually, he saw her again, as Wyatt’s backstory was expanded to included two characters that he and his mother knew when they were living in Las Vegas, Nevada.

The deep connection Wyatt has with Flo caused him to break up with Sally last year. As viewers recall, he did that based on evidence that wasn’t well-founded.

The later turnabout that Wyatt had, where he dropped Flo, due to her role in the Beth Spencer (Madeline Valdez and River Davidson) debacle, caused him to beg Sally’s forgiveness. But the brief ‘Wally’ reconcile has ended, with Wyatt reaffirming that he loves Flo.

Quinn has always been open about her feelings for Flo. There were moments were Sofer’s character was measured when speaking about Sally. But she’s generally been direct in telling her son that Sally isn’t right for him.

Viewers should expect further drama now that Wyatt told his mother he’s reconciled with Flo again. For his part, Brooks’ character believes that Sally will work through her upset and let him go.

Bold And The Beautiful Spoilers – Fondness Isn’t Love Or Friendship

Pity might be too strong of verb to use when referencing what Wyatt feels for Sally. The clear-headed truth, in retrospect, seems to be that he was falling in love with her before Flo arrived. Then his emotional demeanor totally changed.

It might have been possible for Wyatt to eventually have been friends with Sally after the first breakup. But two drops in less than one year doesn’t project to Sally attending the anticipated ‘Wo’ wedding with all angst forgiven.

Sally’s developing condition, with whatever it is, will impact Wyatt in the near future. With that, Flo’s link to him could be affected, either temporarily, or dramatically depending upon what circumstances are written.