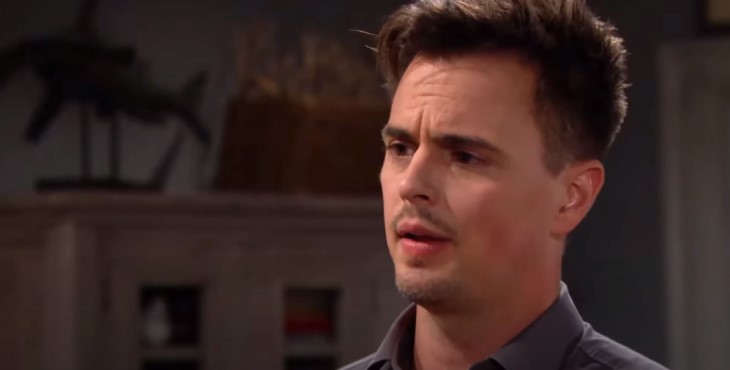 The Bold and the Beautiful spoilers suggest that Wyatt Spencer (Darin Brooks) seems to apologize non-stop to everyone in his life. Now, some B&B viewers feel that Wyatt’s apologizing where he doesn’t need to. Some feel the time has come for Wyatt to be a man and tell his naysayers to back off.

B&B viewers know that not that long ago, Wyatt broke down and agreed with his girlfriend, Flo Fulton (Katrina Bowden) that it was time his former lover, Sally Spectra (Courtney Hope) left his house. As B&B viewers know, it was actually Flo’s idea in the first place for Sally to move in with Wyatt. Due to Sally’s apparent, terminal illness, Flo felt sorry for her. In order to make the last months, weeks, whatever of Sally’s life more bearable, and for her to get to spend that time with someone she loved, Flo thought it was worth it to share her boyfriend.

Of course, when Wyatt broke the news to Sally, she thanked he and Flo profusely for their amazing generosity and kindness. Then Sally proceeded to twist practically everything that Wyatt had to say in an attempt to guilt-trip him into allowing her to stay. In the end, viewers know that Wyatt had the spine of a limp spaghetti noodle when he recanted and told Sally she wasn’t going anywhere and then began giving apologetic reasons for why he’d asked Sally to move out in the first place.

It wasn’t long after that (apparently it was the next day) that Wyatt headed over to the offices of Katie Logan (Heather Tom). There, Wyatt began a long explanation of his thoughts and reasoning for the entire situation that’s been unfolding vis-à-vis Sally. Of course, Wyatt got the third degree from Katie.

How in the world could Wyatt kick a dying woman out of his home? Doesn’t Wyatt understand how cold and callous that is? In fact, even after Wyatt went on and on in what amounted to a pathetic apology tour, Katie acted like she still didn’t understand Wyatt’s reasons. She then proceeded to repeat her original objections. How could Wyatt be so cold and cruel to Sally? (Many B&B fans may have rolled their eyes by this point.)

Now, Wyatt’s mom, Quinn Forrester (Rena Sofer), stuck up for Wyatt. However, some B&B viewers might agree that even she got in on the “let’s kick Wyatt around a bit” bandwagon. Even though she didn’t quite go to town on Wyatt or look at him with revulsion and disgust the way Katie seemed to, still Quinn wasn’t super-duper in Wyatt’s corner or anything either.

The entire time Wyatt talked with Katie and Quinn, some B&B fans might agree he was doing the same thing he did with Sally. Wyatt was apologetically finding reasons these people shouldn’t be angry with him.

The Bold and the Beautiful Spoilers: Flo Tricks Sally – Discovers Hoax And Exposes It https://t.co/vJTnnwaNFD pic.twitter.com/otmNsirmGD

The Bold and the Beautiful Spoilers – Will Wyatt Spencer Ever Stop Apologizing?

At this point, it looks like perpetually apologizing for decisions that are actually within Wyatt’s purview to make, is something he’ll continue to do. Maybe doing so is just part of Wyatt’s personality. Maybe Wyatt is the sort who is always looking for the approval of others. Maybe Wyatt believes he needs permission before he makes a decision.

Well, whatever Wyatt’s problem is, it doesn’t seem Flo shares it. With all the craziness and manipulation Sally is throwing around, there have to be B&B fans who are happy that someone actually has a pair.

Days of Our Lives Spoilers: Rafe Flees Salem with David – Orpheus a Danger to Evan’s Son