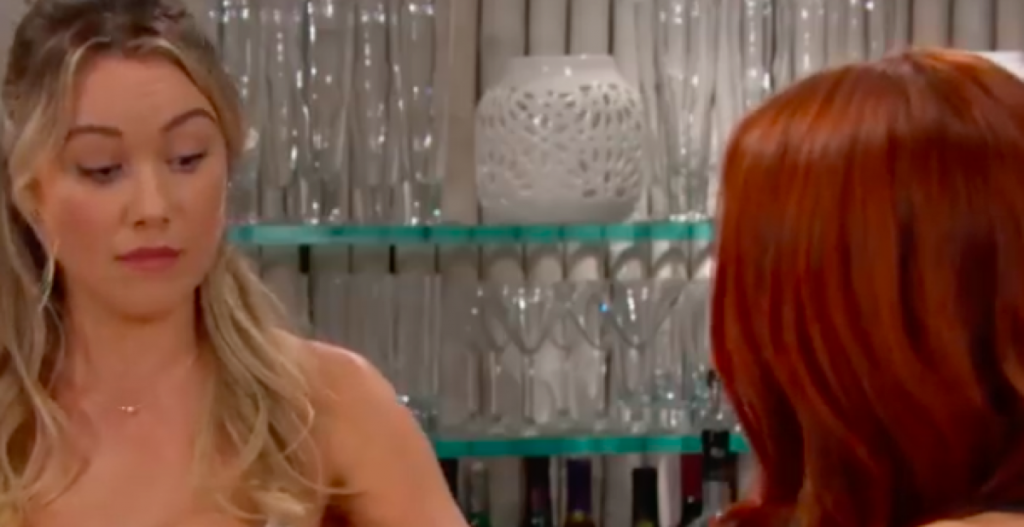 The Bold and the Beautiful spoilers for Tuesday, January 21, tease that Flo Fulton (Katrina Bowden) will get an unexpected visit. As B&B viewers know, Flo and Wyatt Spencer (Darin Brooks) recently reconnected and declared their love for each other. Wyatt then took off to go tell Sally Spectra (Courtney Hope) that he was breaking off their engagement and going back to Flo.

Well, as it turns out, Sally didn’t exactly accept Wyatt’s breakup. Instead, she insisted that they were not breaking up and that she was going to fight for their relationship. And from there, she’ll head directly over to Flo’s apartment, where she’ll confront Flo and set the record straight.

Exactly what Sally will say to Flo remains to be seen, but she’ll probably announce that she’s not just going to willingly hand Wyatt over to Flo. After all, from Sally’s perspective, they’ve been down this road before and it was a big mistake. Sally is not going to let Flo just waltz in and take her man for the second time, and it sounds like she’ll let Sally know it.

Of course, from Sally’s perspective, her world is starting to crumble. As B&B viewers know, Sally thinks that there’s a good chance that she’ll be fired from Forrester Creations, and she’s also been having some terrifying physical symptoms that have been interfering with her work. She probably thinks that she’s on the verge of losing everything in her life, and she’s going to be determined to hold onto Wyatt.

Meanwhile, on Tuesday’s episode of the Bold and the Beautiful, Hope Logan (Annika Noelle) will be feeling particularly vulnerable. As B&B viewers know, she recently saw Liam Spencer (Scott Clifton) kissing Steffy Forrester (Jacqueline MacInnes Wood), and that was the last straw for Hope. She ended her relationship with Liam, and now she’s devastated.

Well, on Tuesday’s B&B episode, Hope will get comfort from someone that she probably never thought she would turn to – Thomas Forrester (Matthew Atkinson). The Bold and the Beautiful spoilers say that Thomas will be ecstatic when Hope allows him to comfort her as she’s reeling from her breakup with Liam.

The Bold and the Beautiful Rumors: Does Sally Have A Brain Tumor? Her Doctor Has The Answers https://t.co/8tw5lqnhXX pic.twitter.com/AzNXJQHF3J

Perhaps Thomas and Hope will both be at Forrester Creations, or maybe they’ll be spending time together with Douglas Forrester (Henry Joseph Samiri), but at any rate they’ll be together, and Thomas will offer a shoulder for Hope to cry on.

Of course, B&B viewers know that this is exactly the type of scenario that Thomas wanted. He’s the one who orchestrated the whole Steffy/Liam kiss and arranged for Hope to see it. He’s wanted nothing more than to drive a wedge in between Liam and Hope for months, and he finally got his way.

It will be interesting to see whether Zoe Buckingham (Kiara Barnes) is on hand for any of the scenes in which Thomas is comforting Hope. Zoe could find herself growing increasingly jealous of Hope, especially if Thomas starts paying less attention to her throughout the process. We’ll see what happens there, but we suspect that Zoe won’t like all the extra attention that Thomas lavishes on Hope.