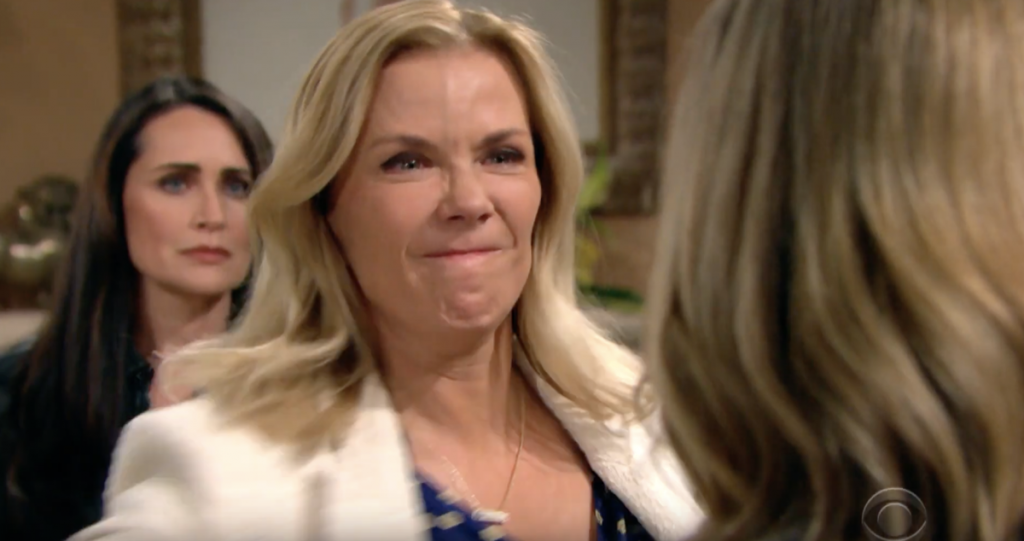 The Bold and The Beautiful spoilers tease that Shauna Fulton (Denise Richards) and Ridge Forrester’s (Thorsten Kaye) friendship crosses the line and Brooke Logan Forrester (Katherine Kelly Lang) has a response this week on The Bold and the Beautiful!

As viewers of The Bold and The Beautiful will recall, when Ridge and Brooke were separated over issues concerning Brooke’s refusal to trust Ridge’s son Thomas Forrester (Matthew Atkinson), Shauna Fulton tried to move in on Ridge, with the encouragement of her old friend Quinn Forrester (Rena Sofer)!

Although Shauna didn’t get Ridge into her bed, she did get him on the couch with her and involved in some passionate kissing at least a couple of times before he realized he didn’t want to lose Brooke. It is this lapse of judgment on Ridge’s part that he talks to Brooke about this week’s The Bold and The Beautiful preview, “A Friendship Crossed The Line”.

Ridge admits to Brooke that his and Shauna’s friendship had crossed a line, even though it never went any farther than kissing. Brooke goes off on Ridge, shouting that she is not going to let Shauna hijack her future with him! The preview shows Quinn’s encouragement of Shauna’s going after Ridge, telling her that if Brooke and Ridge break up, then Shauna can be right there for him.

Brooke goes over to the Forrester Mansion, where Shauna lives with Quinn and Eric Forrester (John McCook), and goes on the attack against Shauna! She is livid as she tells her to quit throwing herself at a man who doesn’t want her, as Quinn looks on. Shauna comes back with, “That’s funny – the way that he kisses me says otherwise!” Brooke slugs her in the jaw and she hits the floor as a shocked Quinn gasps!

Viewers will recall that the couple nearly divorced, having both signed divorce papers in the last couple of months that Ridge never filed. Neither one of them really wanted to break up, but they had reached an impasse in their relationship over Thomas, and Brooke’s fear of his harming her daughter, Hope Logan (Annika Noelle). Ridge couldn’t get past Brooke thinking his son was a monster, even though there has been plenty of evidence to support that conclusion; even his sister Steffy Forrester (Jacqueline Macinness Wood) doesn’t trust Thomas!

Brooke says he is psychotic and in need of psychiatric treatment to even include commitment to a mental hospital, and Ridge cannot see it. They finally realized that they could not be happy without each other and since have reconciled, but there is no way that Brooke is going to let any woman get her claws into her man and she makes that abundantly clear to Shauna in this video!

The Young and The Restless Spoilers: Chance Discovers The Great Secret Of Hillary and Amanda

Days of Our Lives Weekly Spoilers Jan 13-17: Ciara Is Blown Away While JJ Tries To Disable Gabi’s Pacemaker App