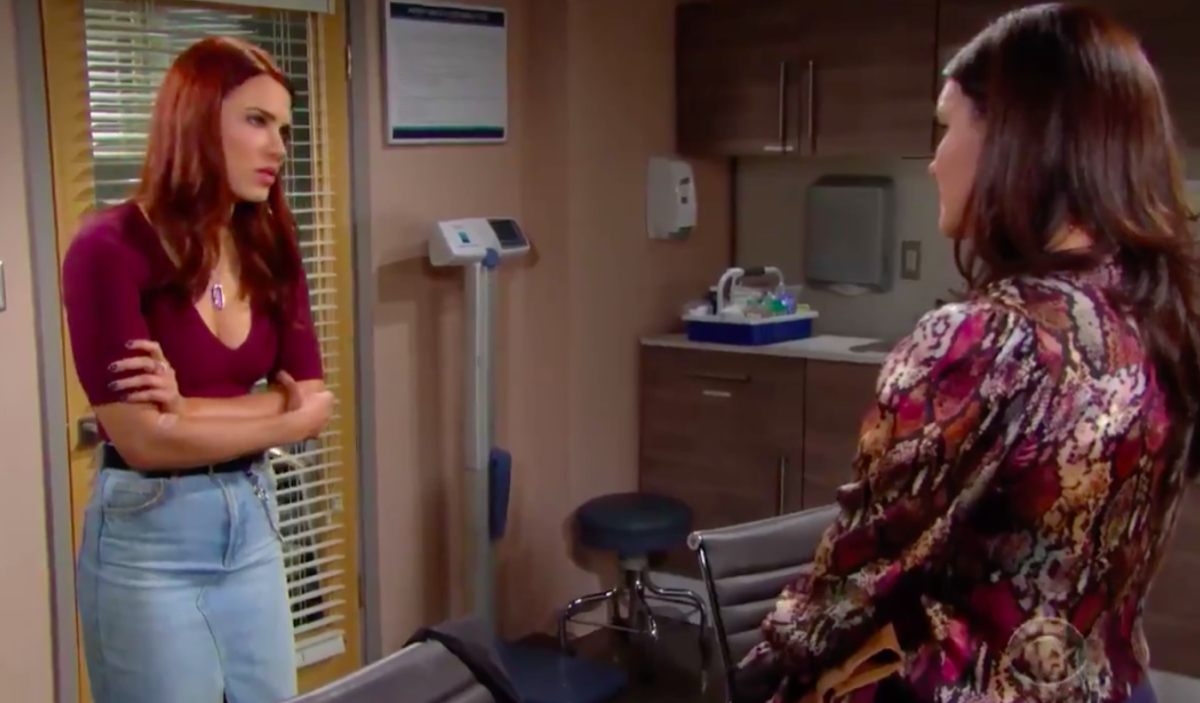 First off, Quinn Forrester (Rena Sofer) will let her feelings be known in characteristic Quinn style. As B&B viewers know, she’s seriously peeved over the fact that Eric Forrester (John McCook) decided to kick Shauna Fulton (Denise Richards) out of the guesthouse at the Forrester mansion. Ultimately, it’s not going to hurt her friendship with Shauna, but it’s the principle of the thing that really irks Quinn.

Quinn doesn’t like it that Brooke Forrester (Katherine Kelly Lang) marched into her home and started making demands about who could and couldn’t stay there. As far as Quinn is concerned, it’s none of Brooke’s business who stays in their home, and she’s worried about what kind of demands Quinn will make next. After all, Brooke has made it crystal clear that she wants Quinn out of Eric’s life for good.

The Bold and the Beautiful spoilers say that Quinn will tell both Eric and Ridge Forrester (Thorsten Kaye) that she isn’t going to back down to anyone, and especially not to Brooke. She’ll let her feelings be known, although it’s likely that neither Ridge nor Eric will like the sound of what they hear. Of course, they probably will have no clue just how dark Quinn is going to go as she lashes out at Brooke in the future.

Meanwhile, on the next episode of B&B, Sally Spectra (Courtney Hope) will realize that she needs to start putting herself and her own well-being first. As B&B viewers know, Sally has gone through some terrible life events recently. Wyatt Spencer (Darin Brooks) has just told her that he wants to end their engagement because he’s in love with Flo Fulton (Katrina Bowden). This will be the second time that Wyatt has dumped Sally for Flo, and it’s got to hurt.

And then, Sally has had a bad situation brewing at Forrester Creations for a while now. She recently was confronted by Ridge and Steffy Forrester (Jacqueline MacInnes Wood) about the quality of her designs. They questioned her work so much that they’re considering canceling the fashion showdown, and that really hurt Sally’s pride.

The Bold and the Beautiful Spoilers: Here’s Why Hope Is Giving Thomas A Chance – Is She Blinded By The Lights? https://t.co/wTv91pre59 pic.twitter.com/Bm7NMU2Zvl

Well, on the next new episode of B&B, Sally will decide to attend to something else that’s been going on in her life. She’s recently experienced some serious health problems. As B&B viewers know, she almost fainted when she was confronting Flo at her apartment, and her hands have been trembling and shaking uncontrollably. It looks like she’ll finally decide to get a medical evaluation for her symptoms and face the problem head-on.

The good news is that it looks like she won’t have to go through it all alone. While she won’t have Wyatt or any of her family with her, a surprising someone will realize that Sally’s going through a medical crisis and will step in to help. That person will be Katie Logan (Heather Tom), and she’ll be on hand to support Sally. Of course, Katie is a good person for that, since she has recently been through a major health crisis herself.

We’ll see what kind of news Sally gets from the doctor, but chances are it will be a serious diagnosis that will change her life forever. Hopefully, Sally will allow Katie to be a supportive friend as she goes through this difficult time in her life.

Days of Our Lives Spoilers for Thursday, January 30: John Grows Suspicious Of “Steve” – Princess Gina Tries To Lure Marlena Into A Trap – Rafe And Shawn Desperately Try To Track Down Gina