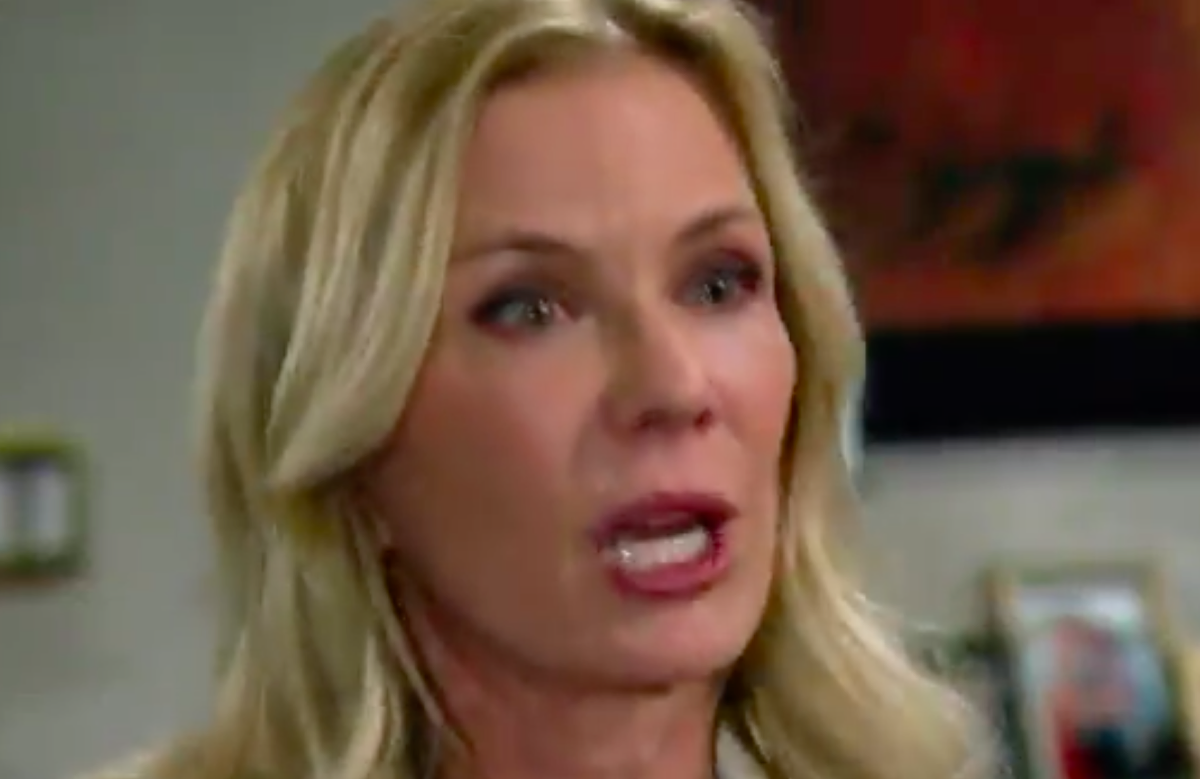 The Bold and the Beautiful spoilers for Thursday, January 16, tease that Katie Logan (Heather Tom) will surprise her family and closest friends. As B&B viewers know, Wyatt Spencer (Darin Brooks) and Flo Fulton (Katrina Bowden) recently received matching text messages from Katie, asking them to come right away for a meeting. That struck Wyatt and Flo as a bit odd, but they headed to the gathering together to see what was going on.

Well, as it turns out, Katie will have called several people together for a meeting. It looks like Bill Spencer (Don Diamont), Will Spencer (Finnegan George). Justin Barber (Aaron D. Spears), Donna Logan (Jennifer Gareis), Flo, and Wyatt will all be invited for the gathering, and what comes next will stun everyone.

The Bold and the Beautiful Spoilers: An Angry Zoe Reacts To Hope And Thomas Sleeping Together

The Bold and the Beautiful spoilers say that Katie will make a special request that nobody saw coming. But what could Katie possibly have to ask that would come as a shock to her family and friends? B&B viewers will have to wait until Thursday’s episode for definitive answers, but we have a couple theories about what it could be.

Perhaps Katie will want to offer Flo some sort of gesture for saving her life last year. After all the difficulties that Katie had finding a donor kidney, she might want to start some sort of foundation or organization to help people in the same situation. And she could want Flo to head up the organization. It’s just a theory, but she might request that Spencer Publications finance the whole thing, and that everyone gets on board with Flo’s involvement.

That would certainly be a great way for Katie to show her appreciation for Flo, and to do some real good in the world. B&B spoilers also indicate that Katie will do something in addition to making a special request; she’ll also ask her family for forgiveness for something. Of course, it’s hard to imagine Katie needing to be forgiven for anything at the point, so we’ll see what that’s all about.

Bold And The Beautiful Spoilers: Brooke Forrester Puts Her Foot Down

Meanwhile, on Thursday’s new episode of B&B, Brooke Forrester (Katherine Kelly Lang) will continue to demand that Eric Forrester (John McCook) rid his house and his life of Shauna Fulton (Denise Richards) and Quinn Forrester (Rena Sofer). As B&B viewers know, Brooke made a beeline for Eric after she found out from Ridge Forrester (Thorsten Kaye) that he had kissed Shauna.

Of course, Brooke is fiercely angry with Shauna, and with Quinn, whom she thinks is in cahoots with Shauna to ruin her marriage to Ridge. Brooke still hasn’t gotten over when Quinn was making a play for Ridge years ago, and all that anger has cone bubbling up to the surface. Brooke believes that her relationship with Ridge is under attack, and she’s out for blood.

The Bold and the Beautiful spoilers say that things will get pretty intense on Thursday’s episode, as Quinn decides to come downstairs after eavesdropping on Brooke’s tirade against her and Shauna. Brooke and Quinn will apparently have an epic showdown, so look for a good shouting match with insults hurled in each direction. It’s not going to be pretty, and soon it seems that both Eric and Shauna will get pulled into the fight.

In fact, ongoing B&B spoilers indicate that Shauna will get in on the shouting match, as Brooke confronts her directly for making a move on Ridge. The whole thing will then turn physical as Brooke forcibly slaps Shauna for making some smart remark about Ridge. At any rate, it’s going to be an explosive Thursday on B&B!

The Young and the Restless Spoilers Thursday, January 16: Sharon Prepares for Chemo & Surgery, Confesses to Nick – Lily Worries About Billy