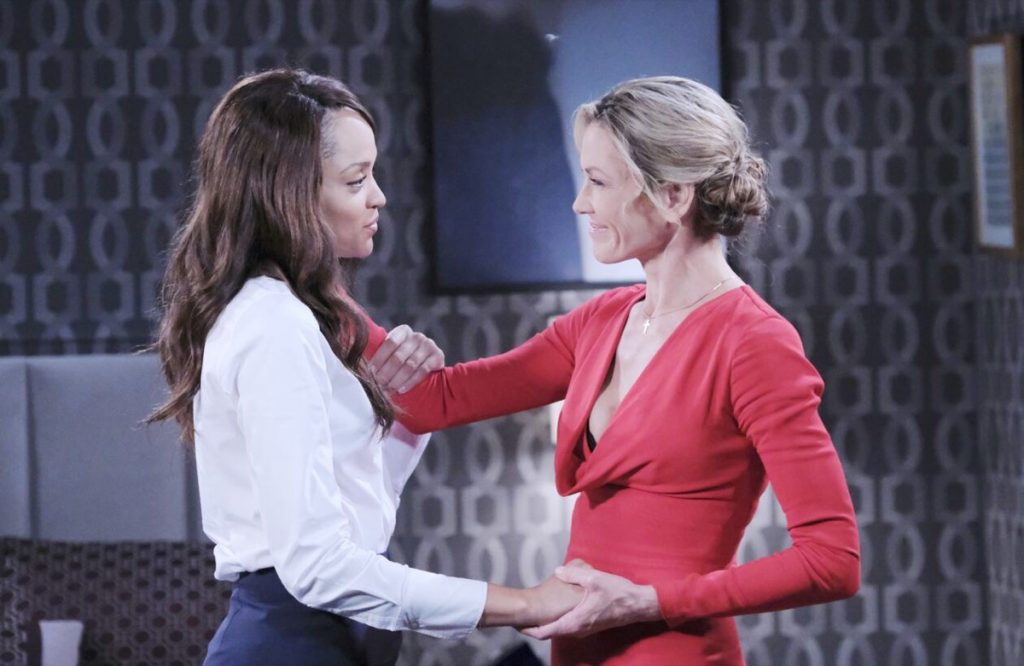 “Steve Johnson” (Stephen Nichols) convinces John Black (Drake Hogestyn) to leave town with him, ironically to hunt down Stefano DiMera (Stephen Nichols)! John thinks “Black Patch” is back in action when it’s really Stefano, in Steve’s body, taking him on a trip so John can be “killed without being killed”. This could be brainwashing John possibly back into his past, where he was controlled by Stefano and known as “The Pawn! “

Longtime Days of Our Lives viewers will also remember Stefano brainwashed him into thinking he was the then missing Roman Brady (at that time, Wayne Northrop, later recast with Josh Taylor, today’s Roman). The idea may be to brainwash him to where he is controllable, and again brainwash him to fall in love with Hope Brady aka Princess Gina Von Amberg (Kristian Alfonso) and then later do the same thing to Marlena Evans (Deidre Hall) and brainwash her into being Stefano’s “Dark Queen of The Night” which he had also done in the past. But, first John has to be out of the way!

Meanwhile, JJ Deveraux (Casey Moss) attempts to disable Gabi Hernandez DiMera’s (Camila Banus) pacemaker app, having managed to somehow separate Gabi from her phone. He won’t have very long to do so, however, and there may be failsafes built into the app itself to prevent it from being disabled!

That would indeed pose a problem and a huge one, as he tries to prevent Gabi from using it to kill Julie Williams (Susan Seaforth Hayes) by blowing up her heart through her pacemaker if Gabi doesn’t get her way where Lani Price (Sal Stowers) is concerned! If this app is not disabled or removed, he may have to destroy the phone itself, which could lead to dire consequences for himself if he cannot convince Gabi that he didn’t do it!

Lani Price (Sal Stowers) enlists Kristen DiMera’s (Stacy Haiduk) help, possibly with either creating a diversion for JJ to complete his mission, or maybe asking Kristen to throw her DiMera weight around with a call to Visionary Bionics, the DiMera company that Gabi got the app from to begin with.

Perhaps Kristen can convince the company to disable or uninstall the app from their end if she can spin a convincing enough story – for one thing, Gabi will no longer be a DiMera if she successfully marries Eli Grant (Lamon Archey) and shouldn’t have access to anything DiMera!

General Hospital Spoilers: Peter is Desperate! Who Will Be His Next Victim, Spinelli? @TVSoapVideos #gh #generalhospitalhttps://t.co/l1bf9JBi2m

Elsewhere, Kayla Brady (Mary Beth Evans) and Rafe Hernandez (Galen Gering) compare notes on “Hope” aka Princess Gina, and talk about her bizarre behavior and try to come up with a timeline for when it started. They know it started shortly after Julie nearly died waiting on a heart transplant, and for a while attributed it to Hope being under extreme stress because of that.

Kayla may realize that it was also right after she kicked Dr. Wilhelm Rolf (William Utay) out of his lab in Salem University Hospital that she had allowed him to use temporarily to retcon the amnesia serum for Jack Deveraux, (Matthew Ashford) which Days of Our Lives viewers will recall needed to be recreated when Eve Donovan (Kassie DePaiva) trashed the whole batch he had reformulated, plus burned Rolf’s formula diary! Perhaps by comparing notes, they will be able to tie Rolf’s expulsion to Hope’s bizarre behavior starting!

Days Of Our Lives Spoilers: Abigail Is Kidnapped, Shocked To Find Sarah On Remote…