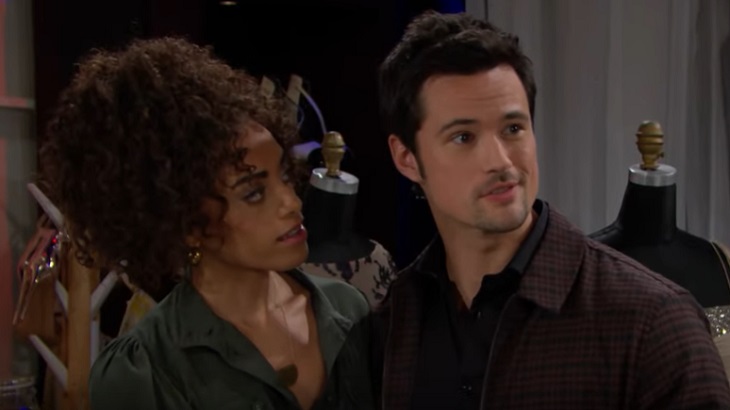 The Bold and the Beautiful spoilers for Thursday, February 20, tease that Brooke Forrester (Katherine Kelly Lang) will have some harsh words for Thomas Forrester (Matthew Atkinson). As B&B viewers know, Brooke feels a tremendous amount of animosity toward Thomas, and she can’t help but verbalize her feelings about him to whoever is around. She can’t prove it, but she strongly believes that Thomas is manipulating Douglas Forrester (Henry Joseph Samiri) to get to Hope Logan (Annika Noelle).

The Bold and the Beautiful Spoilers: Brooke Forrester Knows That Thomas Forrester Is Manipulating His Son

Of course, B&B viewers know that Brooke is right, and that Thomas has been manipulating both Douglas and Hope big time. He has been flaunting his newfound relationship with Zoe Buckingham (Kiara Barnes) and engaging in public displays of affection in front of Douglas so that he’ll get upset and run to Hope asking her to be with his Daddy and not Zoe.

Well, on Thursday’s episode of B&B, members of the Forrester family, including Brooke, will gather for a family dinner that Thomas has arranged. He’s saying that he’s doing it for the family, but he has an ulterior motive in mind. He wants to show Douglas just how close he and Zoe have become, and it looks like Zoe will be a prominent part of the dinner gathering.

The Bold and the Beautiful Spoilers: Brooke Forrester Confronts Thomas Forrester About Flaunting His Relationship with Zoe Buckingham

Brooke won’t like this one bit, and she’ll take the opportunity to blast Thomas for his deception. She’ll call him out on using his relationship with Zoe to make Hope think that he’s over her. But Thomas will probably handle Brooke with ease, insisting that he’s just having an over-the-top reaction. He’ll probably point out that he’s just doing what she’s wanted all along by moving on with Zoe.

Thomas will stop at nothing to get the family he wants. See what happens this week on #BoldandBeautiful! pic.twitter.com/ciyO9N7Rpn

Meanwhile, on Thursday’s the new episode of B&B, Thomas will really put on a show for the whole family to see. He’ll make sure that Zoe is a prominent part of the evening, and that everyone present sees just how happy they are together. Of course, Thomas will want Douglas to see all of this as well, so that he’s sufficiently upset and keeps telling Hope that he wants her to be with his Daddy.

The Bold and the Beautiful Spoilers: Thomas Forrester Proposes To Zoe Buckingham

Well, it seems that Thomas will really escalate things when he takes a moment out from the festivities to propose marriage to Zoe. It looks like the proposal will be a public event, so that Douglas and Hope get a front-row seat to the action. Thomas will want Douglas to freak out over the whole thing, which will in turn freak out Hope, and it looks like he’ll get his wish on both fronts.

The Bold and the Beautiful spoilers say that Douglas will take center stage at the Forrester family dinner, so it looks like he may just have a very bad reaction to the proposal. While Brooke, Ridge Forrester (Thorsten Kaye), Eric Forrester (John McCook), and everyone else look on, it seems that Douglas might have a meltdown. And inwardly, Thomas will be thrilled because it will put him one step closer to being with Hope, or so he thinks.