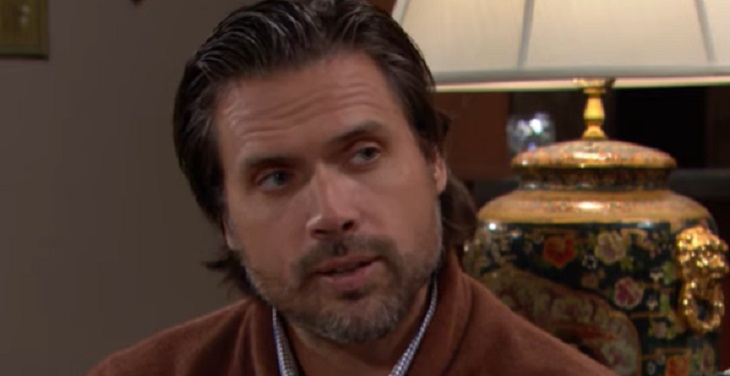 The Young and the Restless (Y&R) spoilers for Thursday, February 20, tease that Victor Newman’s (Eric Braeden) gala will wind down, but the drama’s about to rev up! First, let’s talk about a special present from Victoria Newman (Amelia Heinle) and Nick Newman (Joshua Morrow). They hand over the car replica, which Victor loves.

Next, Noah Newman (Robert Adamson) chooses to support Summer Newman (Hunter King) when he gets updates on her reunion with Kyle Abbott (Michael Mealor). He wants his sister to be happy. Sharon Newman (Sharon Case) echoes the idea at table across the room. She gets that Lola Rosales (Sasha Calle) suffered, but the doesn’t think that should prevent Summer and Kyle from finding their bliss.

When Phyllis Summers (Michelle Stafford) pipes up in agreement, Jack Abbott’s (Peter Bergman) surprised. Phyllis just thinks it’s hard enough to find true love. She points out that it can all go away in a heartbeat.

Near the photo gallery, Chance Chancellor (Donny Boaz) needs to tell Abby Newman (Melissa Ordway) something. When she learns it involves Phyllis and Adam Newman (Mark Grossman), she notes that’s never a good combination. Chance eventually spills that Adam saved his life. He claims the guy who caused the incident has gone off the radar.

Abby gets the picture and presumes Phyllis used the info to secure Chelsea Lawson’s (Melissa Claire Egan) shares. It isn’t long until Abby confronts Phyllis, who encourages Abby to give up her shares, too. Abby makes it clear that it’s not happening. Chelsea also get in on the drama, so Nick teases Phyllis later about her knack for riling people up.

Afterward, Sharon brings Rey Rosales (Jordi Vilasuso) up to speed. Noah gets compliments on his work from Victor before he tells Sharon he’ll take her home. Back with Chance, he’s concerned about Phyllis’ recording. Chance tells Adam that Phyllis can use it as a weapon against them for as long as she wants. Adam doesn’t think Phyllis will win forever. He irritates Chance by bringing up the idea of Abby selling her part of the hotel.

Nick rejoins Phyllis for cozy scene in the shadowy gallery. He marvels at how Phyllis can see into his soul. Phyllis thinks Nick can see her as well and truly knows who she is as a person. After Nick talks about Phyllis protecting her heart with all her antics, they lean in for a kiss.

At the Grand Phoenix, Billy speaks to Amanda Sinclair (Mishael Morgan) about Victor’s celebration. He rants about Victor being celebrated for living life on his own terms. Billy’s frustrated since that’s all he wants to do. When Amanda starts to leave, Billy gets the feeling that she’s trying to avoid him. He contends that perhaps everybody’s right; maybe he’s a ticking time bomb.

Young and the Restless Spoilers – Ripley Turner Crashes The Party

Billy ultimately puts a tuxedo on and plans to crash the gala. Amanda tries to stop him, but her efforts are futile. As Billy exits, Amanda follows while someone watches. We later see that it’s Ripley Turner (Christian Keyes), who also crashes the party.

Over with Victoria, she isn’t keen on talking to Jill about Billy. Meanwhile, Billy himself makes his way to the gallery and once again rants about Victor. He’s not impressed with the shrine. Amanda insists Billy is drunk and wants him to go. She encourages Billy to calm down and touches his face in the process.

Ripley glares at Amanda and Billy as they interact. Victoria happens to be in a white dress that’s extremely similar to Amanda’s gown. Ripley turns away for a moment as Amanda walks off and Victoria takes her place. After the lights dim, Ripley mistakes Victoria for Amanda and plunges a knife into her side.

Victoria wobbles toward the wall in shock as Billy asks if she’s OK. He looks down at the blood before Victoria leans into his arms to steady herself. The Young and the Restless spoilers say this bombshell will make some serious waves in Genoa City! We’ll keep you posted as other Y&R news comes in. Stay tuned to see what else is looming on the CBS soap.