The Bold and the Beautiful Spoilers: Thomas Proposes To Zoe – Will She Realize She’s Being Used?

The Bold and the Beautiful (B&B) spoilers tease that Zoe Buckingham (Kiara Barnes) will soon find herself in an interesting position. As B&B viewers know, she’s been on a whirlwind romance with Thomas Forrester (Matthew Atkinson) over the past several weeks, but it’s all been part of Thomas’ devious plan.

Thomas has been using Zoe from the get-go. In the beginning, he embarked on a relationship with her in order to convince Hope Logan (Annika Noelle) that he wasn’t obsessed with her any longer. He wanted to work closely with Hope on her line at Forrester Creations, and he thought that the best way to “prove” that he was over her was to be in a relationship with someone new. 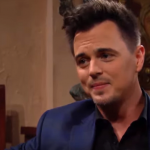 Now that Thomas seems to have convinced Hope that he’s not obsessed with her, he’s doing his best to make her feel jealous of his relationship with Zoe. And now he’s started manipulating Douglas Forrester (Henry Joseph Samiri) again to try to convince Hope that it would be best for Douglas if the two of them were together.

Well, according to the Bold and the Beautiful spoilers, Thomas will really ramp up his plan in the days to come. He’ll plan a Forrester family dinner with everyone there, including Douglas, and he’ll have some major manipulation in store. B&B spoilers say that he’ll pop the question to Zoe at the dinner. He’ll make it nice and romantic…and very public so that Douglas sees the whole thing.

Thomas will be hoping to provoke a reaction out of Douglas in order to get to Hope. He thinks that Hope will see Thomas moving on with his life and the negative effect it is having on Douglas, and that she’ll start to realize that what Douglas really needs is for both of his parents to be together.

The Bold and the Beautiful Spoilers – Will Zoe Buckingham Realize That She’s Just Thomas Forrester’s Pawn?

But what about the effect of all of this on Zoe? Now that she’s overheard all of Liam Spencer’s (Scott Clifton) accusations about how Thomas is using her, will she wake up and realize that this very public marriage proposal is nothing more than a ruse designed to get reactions out of Douglas and Hope?

According to B&B spoilers, Zoe will have a public request of Thomas before she can ever consider saying yes to his proposal. So perhaps she’ll be onto Thomas’ little game and she’ll want some sort of assurance. Could Zoe finally be getting skeptical about Thomas’ affections toward her? Will she finally realize that she’s being used?