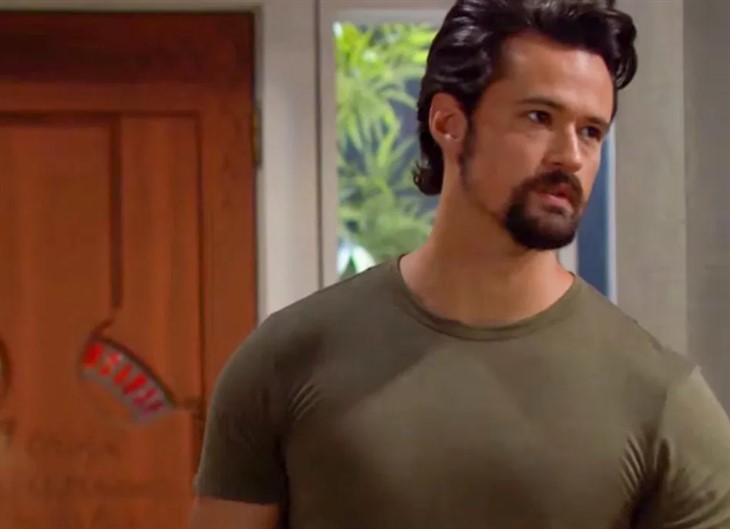 The Bold and the Beautiful spoilers tease that Thomas Forrester (Matthew Atkinson) looks noticeably different. But more importantly, he’s behaving differently. The gap since viewers last saw this character in mid-March and the initial dialogue Atkinson delivered in his first scene at the cliff house implies that he’s taken all that’s happened to heart.

However, this is Thomas that we’re watching, writing, and reading about. So, Steffy Forrester’s (Jacqueline MacInnes Wood) injuries and projected extended recovery period from her motorcycle accident will create a need at Forrester Creations. Someone will need to step up to help Ridge Forrester (Thorsten Kaye) run the family business in Steffy’s anticipate reduced work schedule.

The Bold And The Beautiful Spoilers – He Was A Daydream Believer

Thomas had a daydream many months ago. In it he was married to Hope Logan Forrester (Annika Noelle). Their family included an older Douglas Forrester (Henry Samiri), the addition of other children, and the subtraction of all other Logan women, who Thomas said were dead.

In this fantasy, Thomas was running Forrester Creations. Steffy’s place in the business was unknown. Apparently she’d been kept on out of a sense of loyalty. Thomas was being charitable, in his mind.

It seems as though B&B is in the process of switching the drama from Thomas’ life to Steffy’s. However, it’s not as though the writing staff will have Wood play a dark version of the character.

Instead, Steffy appears heading into an arc that’s topical and involves prescription pain-killers. But possibly the tale develops into a drug addiction that veers far off-course from what Doctor John Finnegan (Tanner Novlan) prescribed.

Assuming the above happens, Thomas might not seek power. Ridge could ask his son to help him in Steffy’s absence. Though it might later appear as though Thomas was an opportunist, based on his reputation.

The Bold And The Beautiful Spoilers – Fresh Direction Is Welcomed

Atkinson and Wood are great actors. Their characters have a sibling rivalry, but it’s also clear that they care deeply for each other.

With the Phoebe Forrester (Madeline Valdez and River Davidson) ruse long gone and Thomas’ obsession with Hope having passed, it’s time for B&B to write Atkinson’s character in a straight line. Having Steffy confront a demon of this particular type should also provide solid soap.

The Bold And The Beautiful Recap & Spoilers Tuesday August 11: Ridge Gets Bad News, Wyatt And Flo Hit The Sheetshttps://t.co/Ny1MZ5gwS5

Thomas can be redeemed if he doesn’t take advantage of a work opportunity, while his sister confronts physical and possibly psychological challenges.