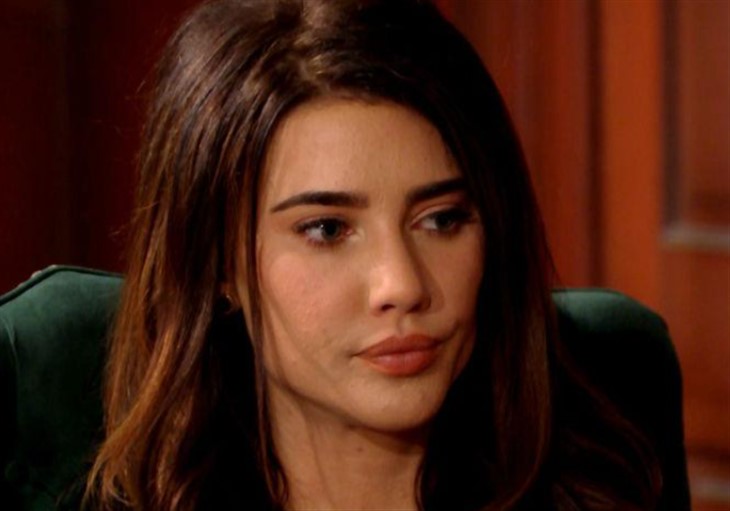 CBS The Bold and the Beautiful spoilers tease that in Los Angeles Steffy Forrester (Jacqueline MacInnes Wood) tells Dr. John Finnegan (Tanner Novlan) that she loves him. That’s a warp-speed B&B coupling for those who are keeping dynamic duo scores.

From near tragedy to a new man. That’s the plot path Wood’s character has been on since the show began airing new episodes in the summer.

Viewers who have long been urging, or insisting, that Steffy pull out of Liam Spencer’s (Scott Clifton) sphere of influence are being rewarded. Her connection with Finn is real and could be lasting, depending upon which direction the writing staff goes.

Steffy couldn’t accept it. That’s partially why she kept a happier times photo of herself and Liam hung above the modest mantle in the cliff house. But Steam was over awhile ago.

Liam’s love, or obsession, with Hope Spencer (Annika Noelle), is a matter of strong opinion. Being fair likely causes one to admit that he and Hope are the better-paired personality match, as Steffy proved too much for Liam. He couldn’t keep up with her entrepreneurial spirit, as his idealist view of what everyone’s reality should be simply wasn’t and isn’t realistic.

Of course, the intrigue with all new major characters involves whatever their invented, or tied-in backstory proves to be. Maybe Vincent Walker (Joe LoCicero) obtains his substances from the doctor, who’s still trying to pay off his medical school debt. Then again, it could be that Finn is as clean as his latest haircut.

Assuming (and hoping) that Finn isn’t a cloaked nut, Steffy has met someone who she could be with for years. Now, this is the modern soap world. So, all won’t be 1930’s radio swell indefinitely. But at least give Sinn an extended chance B&B, okay?

Finn said it wasn’t a mistake for Steffy to take off on her second fated motorcycle ride. Well, that’s highly subjective and generous, as she almost certainly wouldn’t have been hurt that bad in her luxury vehicle, or if she’d taken a run on the beach.

As far as Steffy’s choice to take pain meds, addiction issues are understood in deeper ways these days. While one should never disregard free will issues, as Steffy is an intelligent human being, the combined effects of her intense pain, isolation, and whatever those chemicals were that Vinny illegally sent proved overwhelming.

The past is gone and along with it Steam. Steffy is living better now and Finn is there too. Today and many tomorrow’s are her focus, as they should be.