The Bold and the Beautiful spoilers tease that Thomas Forrester (Matthew Atkinson) is applying a different type of pressure to Hope Logan (Annika Noelle) than he has before. Yes, Douglas Forrester (Henry Joseph Samiri) is still being used as an emotional weapon, but other factors are now involved as well.

Meanwhile, Hope is considering her options. Realizing that Thomas doesn’t seem to understand how to be a father, it’s fair to wonder if Noelle’s character will follow through on her plan to seek full custody, rather than agreed to Thomas’ remarriage plot? 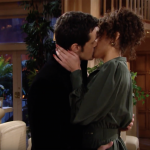 The Bold And The Beautiful Spoilers – Zoe Buckingham Is An Alternative

Happening upon Thomas outside of Vincent Walker’s (Joe LoCicero) apartment was either one of those soapy circumstances, or Zoe plotted it. Assuming the upside, Thomas basically used the situation to turn Barnes’ character into his latest pawn, or even potential wife.

However, it could be possible that Zoe holds Thomas responsible for Xander having left her, as both were threatened by Atkinson’s character last year. If this proves true, Thomas is in serious danger and doesn’t even know it.

The Bold and the Beautiful Spoilers: Thomas Pops The Question, But To Wrong Woman – Douglas Freaks https://t.co/Q9lptpG2YI pic.twitter.com/MFHA08T2KA

Hope cares for Douglas, as Thomas’ son cares for her. She refused to walk away from the commitment she made to him when Liam asked her to do so, as part of his conditioned remarriage proposal.

Now, she sees that Thomas apparently is into Zoe. Initially considering his interest to be contrived, Hope is wondering how any Thoe relationship would impact Douglas’ life.

Hope told Brooke Logan (Katherine Kelly Lang) that after securing Douglas’ legal adoption that she was in a better position to seek full custody someday. That moment could arrive soon, if Hope believes that Douglas would be better off.

The Bold And The Beautiful Spoilers – Thomas Forrester Testing Reality

Thomas genuinely isn’t sure if Hope has any romantic interest in him, or not. Having orchestrated her break from Liam, without Hope’s knowledge, Thomas believes that he’s in a stronger position now than he was when Thope married last year.

Whether Hope will feel compelled to at least become involved with Thomas, rather than allow him to be with Zoe and negatively affect Douglas, remains to be seen. The reality Hope is facing isn’t all that it seems and can move in more than one direction based upon how she responds to the different type of pressure that Thomas is applying.

Days of Our Lives Spoilers: Kayla Makes An Attempt To Get Though Steve – But Will It Work?