Days of Our Lives Spoilers: Kayla Makes An Attempt To Get Though Steve – But Will It Work? 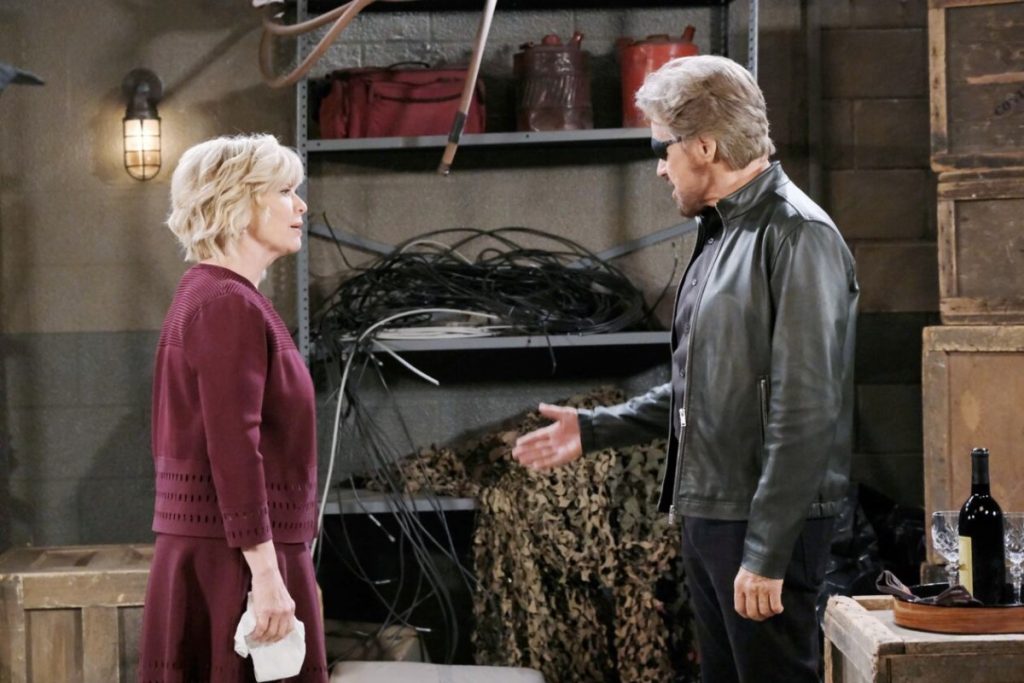 Days of Our Lives (DOOL) spoilers tease that Kayla Brady (Mary Beth Evans) will find herself in a terrifying situation. As DOOL viewers know, she’s currently in a warehouse with Stefano DiMera aka Steve Johnson (Stephen Nichols), and she’s under the belief that he’s Steve. She agreed to help him, but then got drawn into smuggling him out of the hospital and now she’s in a real bind.

As DOOL viewers know, Steve sabotaged her phone, and so she hasn’t received the messages telling her that Steve is really Stefano. Well, according to Days of Our Lives spoilers, “Stevano” will soon get annoyed with Kayla and he’ll finally reveal himself to her as being Stefano. That will come as a big surprise to Kayla, and she’ll feel quite certain that the whole thing is a big joke – it will just seem too absurd to be true.

But then Stevano will rip off his eye patch, revealing that he has two good eyes. That will take Kayla by surprise, and it seems that the more he talks, the more she’ll realize that he’s telling the truth. She’ll remember how Steve abruptly disappeared from radar, and then how he abruptly signed divorce papers. She’ll also remember how he uncharacteristically didn’t come to his own sister’s funeral.

Well, according to DOOL spoilers, Kayla will ultimately realize that Stevano is telling her the truth, and that he’s in fact Stefano living inside Steve’s body. That will probably be terrifying to Kayla, and she’ll find herself determined to get through to Steve. She’ll talk to Stevano, telling him that she knows that Steve is in there somewhere.

Days Of Our Lives Spoilers: Sonny and Will Leave Town After Victor’s Part In Will’s Conviction Revealed #Days #daysofourlives https://t.co/p0PXYTIlsX

But is Steve really in there? After all, no one really knows how Dr. Wilhelm Rolf (William Utay) performed the memory transfer procedure. Did he actually remove Steve’s “essence” – that is, his memories and personality – from his body and place it on a flash drive somewhere? Or is Steve’s essence still in his brain somewhere?

Time will tell, but Kayla will do her best to talk to Steve and to try to reach him. And according to DOOL spoilers, Stevano will take Kayla hostage, so her nightmare will be nowhere near over. Eventually, Stevano will try to get Justin Kiriakis (Wally Kurth) to trade Marlena Evans (Deidre Hall) for Kayla, so it’s going to be a big mess.

But throughout it all, look for Kayla to keep trying to get through to Steve. Now that she knows that Steve fell victim to Stefano and Rolf and that he didn’t just abandon her, she’ll be more determined than ever to reach him.