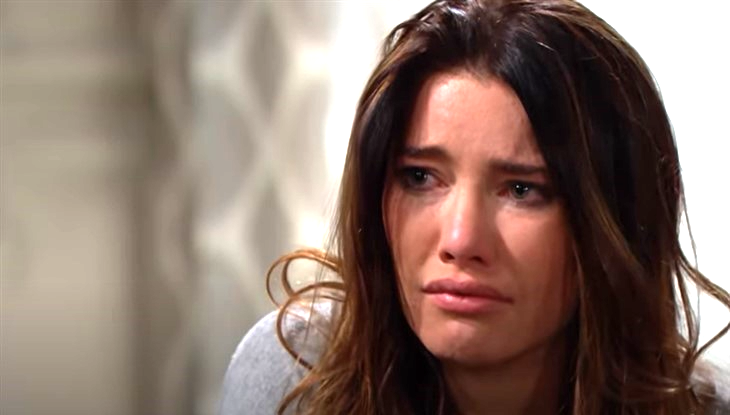 CBS The Bold and the Beautiful spoilers reveal that Steffy Forrester (Jacqueline MacInnes Wood) made the horrible decision to take Vinny Walker’s (Joe LoCicero) pills. He told her they were exactly the same meds prescribed by her doctor, but he’s not being truthful about that. His pills will cause Steffy to have delusions and lead to her making a tragic decision.

The Bold And The Beautiful Spoilers – Steffy Forrester’s Struggle

B&B spoilers reveal that Steffy was already struggling with her dependence on painkillers. However, when Dr. John “Finn” Finnegan (Tanner Novlan) refused to give her another refill, Steffy had a good chance of beating the pain pills. Then, Vinny just had to send Steffy a secret gift. Unfortunately, this gift will end up having devastating effects on Steffy and her loved ones.

The Bold And The Beautiful Spoilers: Ridge Moves Away From Brooke – Bond With Shauna Deepens

Vinny gave Thomas Forrester (Matthew Atkinson) a gift to hand-deliver to Steffy. When she opened the box, it was a stuffed animal for Kelly Spencer (Colette and Avalon Gray). However, when she picked up the bear, she noticed a prescription bottle underneath it. She looked at it and the bottle contained a few pills. When she contacted Vinny to ask him what the deal was, he insisted that nobody should be in pain. He assured her that they were the exact same pills that she got from her doctor.

However, that is a lie as Vinny’s pills are much stronger and more dangerous.

The Bold And The Beautiful Spoilers – Drug-Induced Delusions

The Bold and the Beautiful spoilers reveal that the pills instantly make Steffy pass out and be unresponsive. Eventually, Liam Spencer (Scott Clifton) is able to wake up Steffy by slapping her face. She slowly starts to come to, then explodes at Liam. She will also lash out at Brooke Logan Forrester (Katherine Kelly Lang), Hope Logan (Annika Noelle), and others.

The Bold And The Beautiful Spoilers: Ridge Moves Away From Brooke – Bond With Shauna Deepens https://t.co/joPU7c3Bed pic.twitter.com/T8aM58wyAH

Thomas will notice her odd behavior and alert Ridge Forrester (Thorsten Kaye). Also, expect Steffy to flat-out accuse Liam and Hope of kidnapping her daughter. It is also teased in Soap Opera Digest that Steffy will go through drug-induced delusions, which will have her react in extreme ways.

The Bold and the Beautiful Spoilers: Tragic Mistake
In the upcoming week, expect Steffy’s spiral downward to continue as Vinny’s pills turn Steffy from merely being dependent to a full-on addict. She won’t be thinking clearly and will have delusions. On top of that, she has a belief that every single person in her life is against her. This leads her to make a dangerous move that could have tragic consequences.

Can Steffy be saved before it’s too late and she loses everything, including her daughter or even her own life? We will have to keep watching the CBS soap opera to find out.