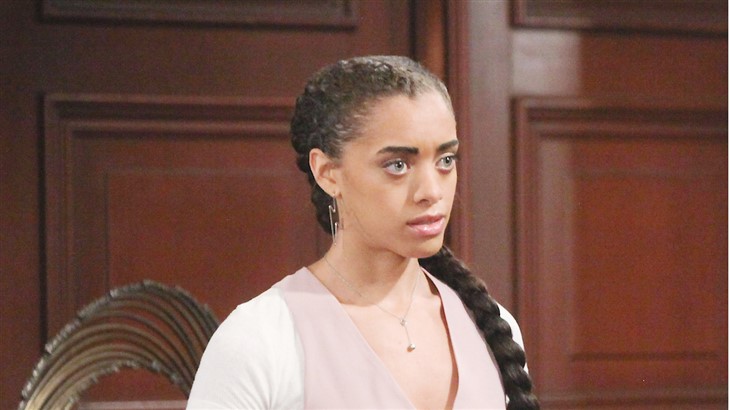 CBS The Bold and the Beautiful spoilers reveal that Zoe Buckingham (Kiara Barnes) hasn’t had the best luck in love. So, she’s really hit the jackpot with Carter Walton (Lawrence Saint-Victor). The actress explains why Zoe has fallen for schemes so easily in the past, calling it “Broken Bird Syndrome.” Keep reading to find out more information.

The Bold And The Beautiful Spoilers – Split With Xander Avant

B&B spoilers reveal that Zoe’s relationship with Xander Avant (Aidan Bradley) didn’t work out. During the “PhoeBeth” scheme, Xander wanted his girlfriend to tell the truth. However, Zoe was more committed to protecting her father’s secret. After everything came out into the open, their romance would not survive.

Then, Zoe came back on-screen and ended updating, then engaged to Thomas Forrester (Matthew Atkinson). When Soap Opera Digest asked Barnes how Zoe was able to fall so easily for Thomas’ manipulation, the actress cited “Broken Bird Syndrome.” She told the magazine,

“Zoe has what I call ‘Broken Bird Syndrome’ where she loves to look at someone’s potential. She’s all about the potential with certain guys and seeing how she can help. Zoe knew Thomas had issues within his family and at the time, Thomas was literally her only friend after everything happened. He seemed to be there for her.”

The Bold And The Beautiful Spoilers – How Is Carter Walton Different?

The Bold and the Beautiful spoilers reveal that Zoe is embarking on a romance with Carter. But with her history of trying to “fix” men, how is Carter going to be different? The actress explained,

“She just really needs to let it all go, breathe it out and take it day by day. What she’s missing is a guy who’s willing to help her, as well as an equal partnership where it’s not all about fixing; it’s about coming together. Carter may just be the man to help her do that.”

The Bold And The Beautiful Spoilers: 5 Signs That ‘B&B’ Liam Is Already Jealous Of Finn https://t.co/ITwEnjLgIE pic.twitter.com/FupcUovSnq

As for the different storylines that Zoe has been involved in since her start on the show, Barnes hopes that her character has a good future. She seems to be involved with a great guy right now. She’s also getting along with Steffy and Hope Logan (Annika Noelle). Ridge Forrester (Thorsten Kaye) has mentioned Zoe has real potential beyond modeling. Thomas even tried apologizing and wanted a second chance, which she just couldn’t do after being used.

Plus, Diamond White from Empire has been cast as Zoe’s sister, so we’ll see what kind of drama that brings to her life!

Days Of Our Lives Spoilers: Emily O’Brien Talks Being Back And Better Than Ever Before