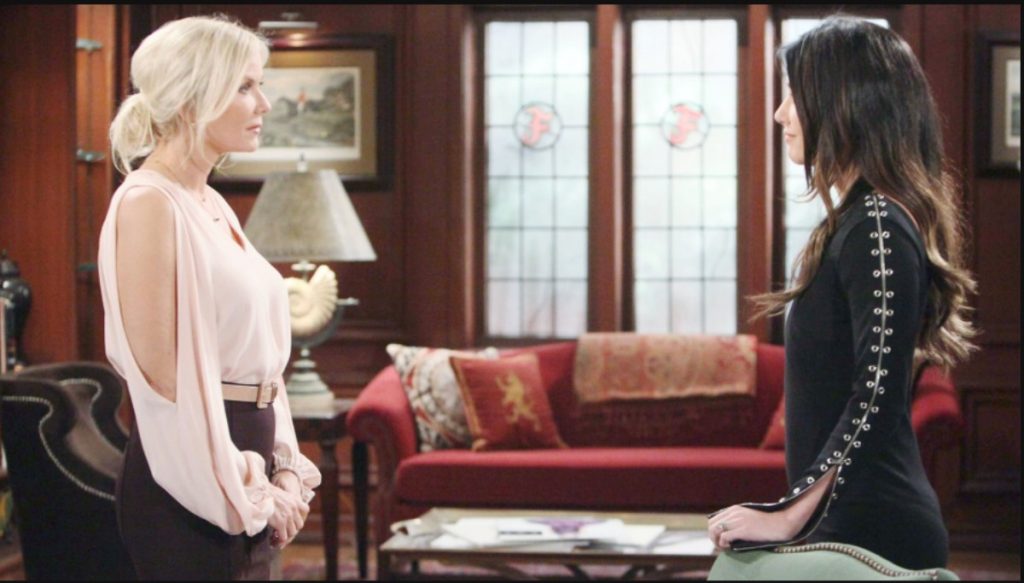 The Bold and The Beautiful spoilers tease that Steffy Forrester (Jacqueline Macinnes Wood) and Brooke Logan Forrester (Katherine Kelly Lang) will try to force Zoe Buckingham’s (Kiara Barnes) blinders off regarding Thomas Forrester (Matthew Atkinson) in an upcoming episode of The Bold And The Beautiful!

It is plain to see that Zoe is so swept off her feet that she cannot see through Thomas. The saying “love is blind” unfortunately does apply perfectly to Zoe. Oh, she did ask Thomas to tell her that he loved her out loud but when he did, that was all that it took to convince her that Thomas really loves her, wants to marry her and that he only has eyes for her, in spite of the problems that there will be getting poor little Douglas Forrester (Henry Joseph Samiri) to adjust to living with Zoe as his new stepmother.

Zoe has tried to get the little guy to bond with her and to accept her, but it just doesn’t seem to be working; no matter how she tries even just to make friends with him, he becomes more and more fearful that if he does, he will lose Mommy Hope Logan (Annika Noelle). Even that hurdle doesn’t faze Zoe – and it certainly doesn’t faze Thomas, he has convinced her that Douglas will accept her in time. Even the fact that this all seems to be happening way too fast isn’t putting Zoe onto that it all might be too good to be true!

Steffy and Brooke try to force the blinders off Zoe by telling her every evil and manipulative thing Thomas has ever done, including the really horrible things like using a video machine to project ghosts on Douglas’ bedroom walls and ceiling at night so Douglas would have nightmares and Hope would want to marry him sooner, letting Hope and Brooke believe he had disintegrated in a vat of acid at the Forrester manufacturing plant, only to reappear later, saying he wanted to teach Hope a lesson after she had accidentally pushed him into it, and they go back quite a few years in Thomas’ history to try to prove to Zoe how manipulative and dangerous he is.

They also try to convince her that Thomas is only using her to get to Hope, and to get Hope back by making her jealous, but Zoe isn’t having any of it – she just simply cannot be objective! As far as the really evil things he has done in the past, she believes people make mistakes but people change – she did! She truly regretted her part in the deception over Baby Beth Spencer (Madeline Valdez) and knows that Thomas regrets the terrible things he did in his own past. But, Steffy and Brooke keep trying, to no avail!