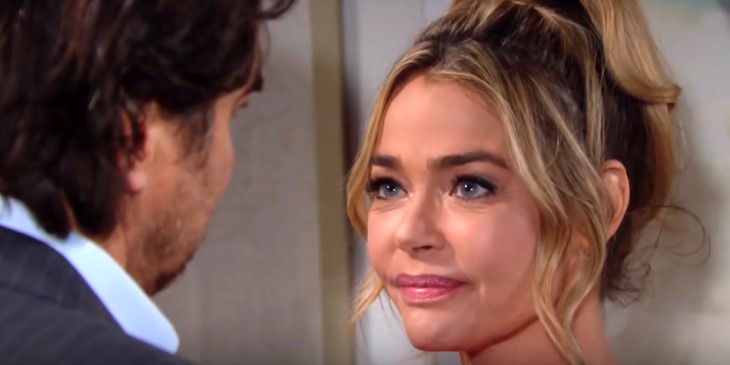 The Bold and the Beautiful spoilers reveal that Shauna Fulton (Denise Richards) is hiding something. When Ridge Forrester (Thorsten Kaye) was looking at her photo album, the Vegas vixen suddenly grabbed it and slammed it shut. Was there a picture that she didn’t want Ridge to see? There is also the abrupt goodbye that left the designer puzzled. What is she hiding?

B&B spoilers reveal that the whole reason Ridge went with Shauna to Las Vegas was to learn more about her. He wanted to spend time getting to know what exactly makes Shauna tick. He was interested in learning Shauna’s history, her routine, and talking about life events that shaped her into the woman she is today.

Ridge started out by glancing through Shauna’s photo album. He looked at pictures of Flo Fulton (Katrina Bowden) as a child. Then he got to about the middle of the photo album when Shauna suddenly took it away. She slammed the album shut and redirected Ridge’s attention to something else.

It seemed a bit odd, as if Shauna didn’t want Ridge seeing something in the back half of that photo album.

The Bold and the Beautiful spoilers reveal that Shauna offered her guest vodka. Ridge said that he probably shouldn’t have any alcohol. But she insisted and the designer succumbed to the pressure.

Considering Ridge’s history of blacking out, particularly with Shauna, she should have respected his initial refusal to drink. Was there a reason why she pushed him to get liquored up? It probably wasn’t just to “loosen him up.” Was there a specific reason why Shauna shoved booze in his hand?

The Bold and the Beautiful Spoilers: Abrupt Goodbye

After Ridge woke up and found himself back with Brooke Logan Forrester (Katherine Kelly Lang) in L.A., Shauna called. She wouldn’t tell him anything that happened the night before. She was only calling to tell him goodbye and that they wouldn’t be seeing each other again. The farewell was abrupt and there is no explanation given.

After hanging up, Shauna looked emotional and distraught. It might have been just sadness at letting Ridge go back to his wife. However, it could be something more. Does she feel remorse for what she did while Ridge was drunk and incoherent? What exactly is she hiding and why all the secrecy about their wild Vegas night?

It seems that there might be a lot more to this story. Even though Shauna plans to stay in Las Vegas, that won’t last long. The actress is still on the CBS soap, which means there is more drama coming up.