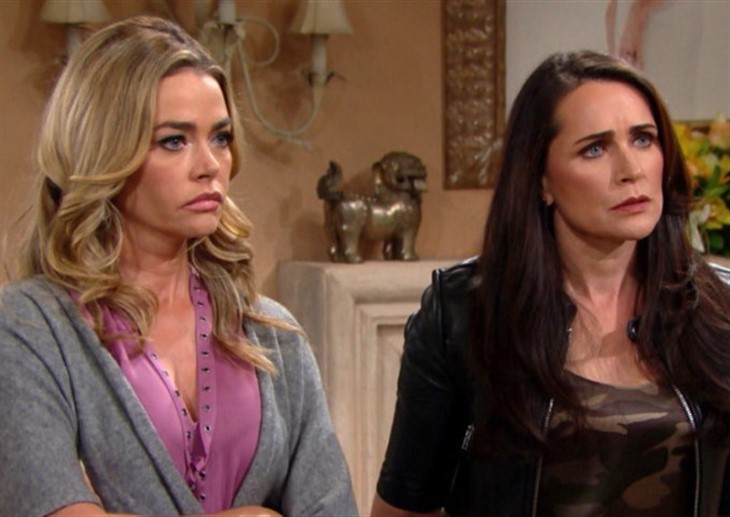 CBS The Bold and the Beautiful document that Quinn Fuller Forrester (Rena Sofer) is incensed. She can’t believe that Shauna Forrester (Denise Richards) would volunteer the truth to Ridge Forrester (Thorsten Kaye) and strenuously shares that take with her longtime friend from Las Vegas, Nevada.

People with bent intentions, like Quinn, don’t understand that being honest with the people one loves is normal. Doing the opposite often creates a countdown, with loving relationships damaged, or ended when the revealed drop is heard.

Shauna knows that she’s responsible for ending Ridge’s marriage to Brooke Logan (Katherine Kelly Lang). While Quinn did encourage this bold action, Shauna used her own free will to take Ridge’s smartphone, while he was in her condo’s shower. Richards’ character then sent a text to Carter Walton (Lawrence Saint-Victor) that set the Bridge divorce paperwork in motion.

Along with the above, Shauna then felt compelled to take further advantage of Ridge, who was reeling due to his fallout with Brooke. Shauna tapped a friend on the strip, who owned a wedding chapel, and the rest became B&B history.

Quinn had feelings for Ridge in the recent past. In her mind, she hasn’t been part of a duo that threw his personal life into chaos. Instead, Quinn feels that she was fully justified in forcing Brooke’s ouster and inserting Shauna into Ridge’s roster of wives.

The lineup of nuptial partners can’t be denied. However, Brooke became his one and only decades ago and fully holds that title to this day and surely will through eternity.

Ridge was just as much of a victim in this sordid storyline as Brooke. Fans also know that he’s also been handling Steffy Forrester’s (Jacqueline MacInnes Wood) addiction issue.

She’s been Eric Forrester’s (John McCook) wife for a number of years. But Quinn’s reign at the top of the Forrester family could be coming to an end. She’ll only have herself to blame if that happens.

But Quinn doesn’t see wrong. In her mind, she’s always justified, with the means being necessary. The good of others, including her husband’s wishes and reputation, wasn’t on the checklist when this scheme was hatched and employed. But consequences are coming, with the Forrester name and Quinn’s portrait in the living room potentially being removed.