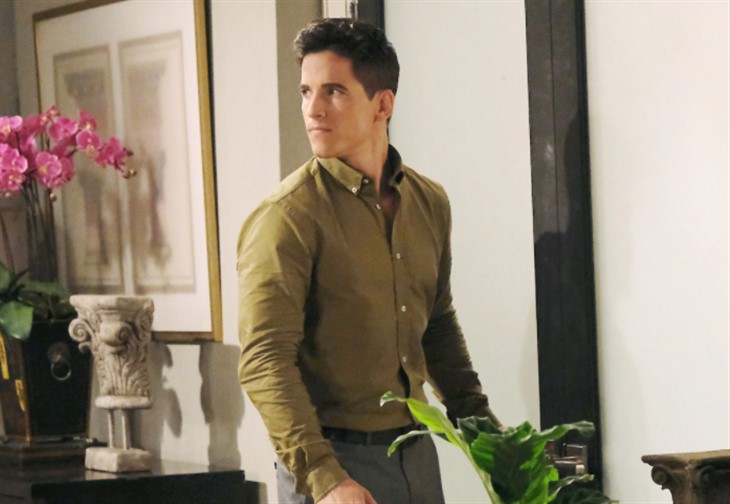 NBC Days of Our Lives (DOOL) spoilers reveal that we met Charlie (Mike C. Manning), the new intern at Titan. Although he seemed nervous, awkward, and fumbled a lot, it is likely just an act. If this is correct, then who is Charlie really, why did the regular assistant vanish without a single word, and is he targeting one of the CEOs? Or is he scheming with one of the warring executives?

DOOL spoilers reveal that Charlie was introduced as a young intern at Titan. He seemed nervous and fumbled a lot. For an insignificant character, he certainly did get a whole lot of screen time. That is the first clue that he is going to make a major impact on a storyline. Plus, nobody is really who they appear to be when they arrive in Salem. Chances are that Charlie is no different.

Xander Cook Kiriakis (Paul Telfer) seemed confused and irritated that the regular assistant had been replaced by a new intern. As co-CEO, you would think Xander would have gotten a memo, been introduced that morning or gotten some sort of heads-up. But nope, Charlie was a complete surprise.

Now, Philip Kiriakis (Jay Kenneth Johnson) wasn’t even supposed to be there that day. Charlie specifically asked Xander about him. Philip didn’t seem surprised to see Charlie in Xander’s office. Later, the protein shake spilled all over Charlie thanks to Xander and Philip watched with a smirk.

Days of Our Lives spoilers reveal that Charlie seemed to be asking Xander too many questions. On the first day on the job, an intern will just do what they are told. But Charlie wanted to know where Philip was and if he could get him anything. As if Xander would know what Philip was craving for lunch.

Now, the regular assistant supposedly wasn’t around because she had a dentist’s appointment. So, wouldn’t they just hire a temp and not get an intern? Interns don’t replace employees for one appointment. They are more long-term, so that is another clue that Charlie was just giving Xander a story.

Plus, where did the assistant disappear to? Why did she suddenly vanish? Is Charlie more sinister than he appears and is he after Titan in general? Or could Philip have brought him in to take care of Xander?