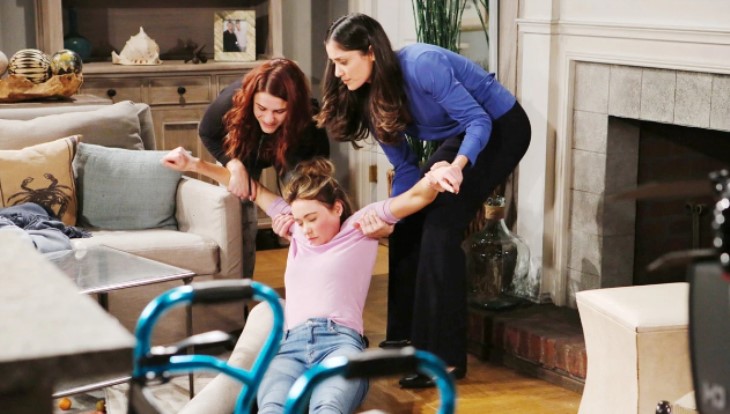 The Bold and the Beautiful spoilers reveal that Sally Spectra (Courtney Hope) is going to have to tell Wyatt Spencer (Darin Brooks) something about Flo Fulton (Katrina Bowden). Could she claim that Flo attacked her and Dr. Penny Escobar (Monica Ruiz) saved her life? Will Wyatt even believe that story? He might if two people are making the same claim.

The Bold and the Beautiful Spoilers – Wyatt Spencer Horrified

B&B spoilers indicate that the last new episode that aired ended in a cliffhanger. Wyatt opened the door just as Sally and Penny were dragging away Flo’s lifeless body. When Wyatt walked in, his eyes were wide and demanded to know what was going on.

What is it that he saw? Let’s assume for a minute that Wyatt catches the women dragging away Flo. How is Sally going to explain this?

It is possible that Sally could claim that Flo attacked her. She will make it sound horrible by adding that she is just a poor, defenseless, dying woman who can barely walk. Fans know that this claim is absolutely ridiculous, but Wyatt is pretty gullible so he just might believe it. But wait, it could get even more scandalous!

The Bold and the Beautiful Spoilers – Dr. Penny Escobar A Hero?

The Bold and the Beautiful spoilers reveal that Sally could claim that her doctor just happened to come by when she heard a ruckus. Upon entering, Penny discovered Flo was attacking poor Sally and bonked her on the head, which saved Sally’s life.

It sounds pretty wild, but recent episodes have indicated that Sally is getting more desperate by the day, so her claiming that Penny is a hero could actually happen.

However, will Wyatt believe Sally’s story, especially when Flo wakes up and tells him that she was attacked? Well, it’s Flo’s word against two women. Wyatt won’t know what to believe, but the majority will probably win.

It looks like Sally might end up beating Flo after all, but the lies are multiplying. Eventually, Sally or Penny will slip and when that happens, Wyatt’s going to be furious that he was played like a fool.

What do you think Wyatt sees when he opens up the door? What kind of excuse will Sally give him if he notices Flo’s lifeless body on the floor? How will Penny’s presence be explained, as Wyatt only knows her as Sally’s doctor and has no idea the two are actually old friends. What a tangled web Sally weaves!