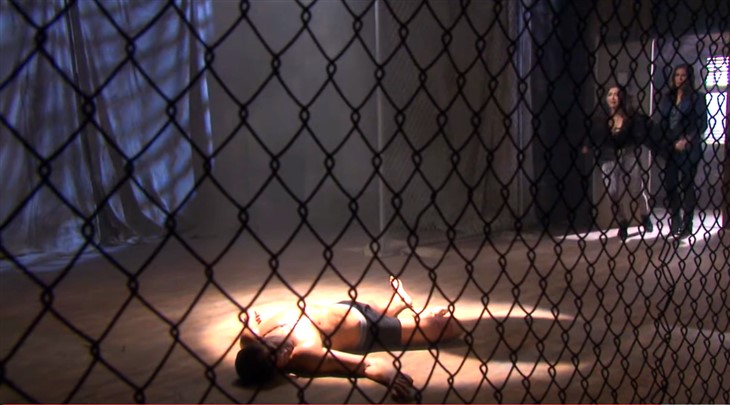 CBS Days of Our Lives spoilers reveal that Hope Brady (Kristian Alfonso) and Ciara Brady (Victoria Konefal) find Ben Weston (Robert Scott Wilson). However, his shoe was conveniently outside the warehouse door, which wasn’t even locked. The chairs and tables were gone. The computer, monitors and the wedding dress had all disappeared. Like the Brady, women were expected.

DOOL spoilers reveal that just before Ben was found, Ciara and Hope were briskly walking along a path and clearly on a mission. Suddenly, Ciara stopped and noticed the shoe Ben was wearing at the wedding was conveniently on the ground. To their left, there were white double doors, which were unlocked.

Coincidence? Dr. Wilhem Rolf’s (William Utay) protege and Eve Donovan (Kassie DePaiva) would never make careless mistakes like that. This was definitely planned, almost as if they were being lured.

Inside the warehouse, Hope and Ciara found Ben laying on the cold, concrete floor. He had injuries to his head, so we don’t think this whole thing was a hallucination. However, the chair and table that Vincent (Michael Teh) was sitting at with his computer and electrode equipment were missing. The black dentist-style chair that Ben had been strapped to was gone.

Days of Our Lives spoilers also reveal that the chains hanging from the ceiling had disappeared. Ciara’s wedding dress and a computer screen. Everything had vanished, which suggests they cleared everything out ahead of time.

It just seems that Hope and Ciara were lured to the warehouse to “save” Ben. We also know that Ben comes face-to-face in Salem in Dr. Marlena Evans’ (Deidre Hall) office. It’s not clear if Marlena is in the office or if Vincent is snooping around her medical files. Also, Eve comes to Salem after Ben is rescued, so there are clearly multiple phases of her plan.

Days of Our Lives Spoilers Next Week: Justin’s Surprise For Bonnie – Why Does He Help Herhttps://t.co/TBTLsrzRNw

Then, Claire Brady (Olivia Rose Keegan) confronts Eve and the villain begs the young woman not to turn her in. We just don’t see Eve doing this realistically, so maybe she is also playing a game with Claire. We feel like things are just going to get a whole lot worse for “Cin” before they get better. Let’s hope the newlyweds can survive this horrific ordeal because it’s far from over.