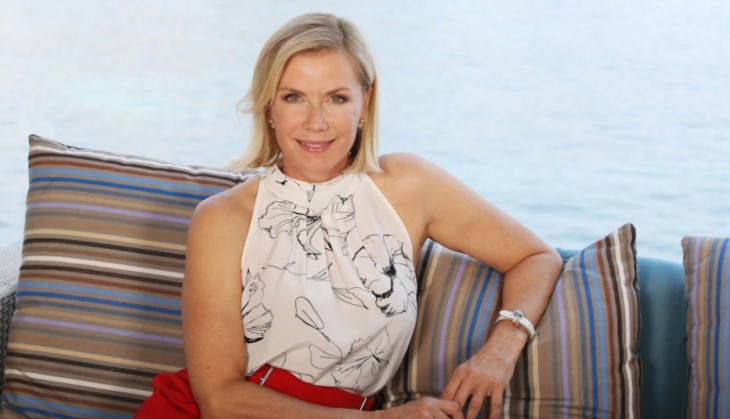 On “The Bold and the Beautiful,” Brooke Logan Forrester (Katherine Kelly Lang) has finally managed to reveal Thomas for who he really is. Although she scored a huge victory against Thomas, there’s no letting up for her since she still has to face the consequences of kissing Bill Spencer (Don Diamont). The actress who plays the role, Katherine Kelly Lang, shared that the secret kiss is so embarrassing for her to alter ego.

In an interview with Michael Fairman TV, the actress has opened up about her character’s latest storyline. Viewers may recall that her relationship with Ridge Forrester (Thorsten Kaye) almost ended thanks to Thomas. Now, it’ll be threatened once again after her kiss with Bill got caught on tape and it has landed in the wrong hands.

The Bold and the Beautiful Spoilers – Brooke Logan Regrets Kiss

Lang said her alter ego is already in the freak out mode. She wanted to take that kiss back the moment it happened. But she can’t hide the fact that she allowed the kiss to happen.

“It’s a little bit of old Brooke resurfacing there. Right away she was like, ‘What are we doing? This is ridiculous. You’re with Katie Forrester (Heather Tom), and I’m with Ridge Forrester (Thorsten Kaye), and we’re both happy”, Land said.

“Brooke has had underlying feelings for Bill, and she probably always will (and he for Brooke), but we know that’s not where we want things to be. So, in Brooke’s mind, it’s ‘let’s forget about that and carry on, and don’t tell anybody.’ Of course, it comes out to some people, and it’s so embarrassing for Brooke,” she continued.

Lang said her character has no choice but to explain herself. The problem is that she can’t explain what happened or why she allowed it to happen. So, her alter ego would just have to succumb to it.

Lang confirmed that Shauna Fulton (Denise Richards) and Quinn Forrester (Rena Sofer) will definitely use the footage of “Brill’s Kiss” to take her down.

When asked how it was like to work with the two, the actress admitted that there’s good chemistry between the three of them.

The Bold and the Beautiful News: Scott Clifton Is Keeping Things In The ‘Feline’ Family https://t.co/fm4J4ySzlt pic.twitter.com/Gq1qvyZm7s

“So, I think it’s been working, and it’s been entertaining and interesting. They’re fun to bounce off of. Usually, we are pretty serious when we do those scenes, especially if they’re more verbally combative,” the actress said.

“So, we’ll just be really serious and stay in it. Of course, sometimes things happen, and you laugh, but we sometimes don’t have the luxury to take the time to laugh and enjoy the moment, because we have to try to get the scene done in one take and move on,” she added.