The Bold And The Beautiful Spoilers: Ridge And Brooke Don’t Need To Remarry Marriage – Shauna Gone For Now 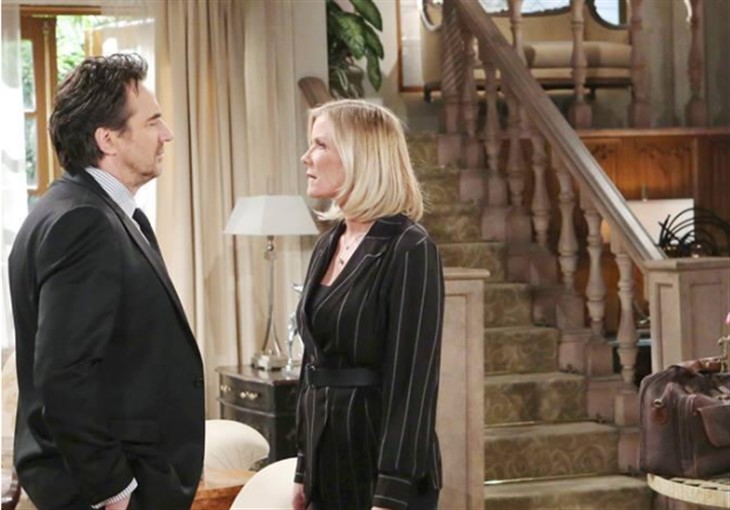 CBS The Bold and the Beautiful spoilers document that Ridge Forrester’s (Thorsten Kaye) tells Brooke Logan (Katherine Kelly Lang) about the end of his presumed marriage to Shauna Fulton (Denise Richards) was restorative. Yes, it is correct to term Shauna a Fulton, rather than a Forrester because the Bridge divorce was never valid.

It is accurate to once again use the last name Forrester when referring to Brooke. And, based on what’s happening with Quinn Fuller Forrester (Rena Sofer), the title of family matriarch could be transferred to Brooke as well.

The Bold And The Beautiful Spoilers – No Need To Get Remarried

Brooke was overjoyed in simply learning that all she believed was validated. Yes, Shauna and Quinn pulled a few fast ones, which wrongfully ended Bridge’s marriage and then resulted in a quickie wedding hours later in a wedding chapel in Las Vegas, Nevada.

They could renew their vows if so inclined. Maybe Carter Walton (Lawrence Saint-Victor), who sensed the Shidge wedding wouldn’t endure, will officiate another Forrester wedding as he was telling Zoe Buckingham (Kiara Barnes). Though that type of event would be to reaffirm a love that first bloomed in 1987, with many variations of it occurring through the decades.

B&B Spoilers – Flashing Back To B&B’s Past

It was entertaining and instructive to see so many classic episodes of B&B during the time of the production shutdown. Ridge (as initially played by Ronn Moss) fell in love with Brooke the moment he first saw her at his father’s house in 1987, as Kaye mentioned to Lang’s character during this month’s Bridge revival storyline.

There’s no question that Brooke and Ridge are B&B’s most famous and enduring couple. They’ve been married numerous times and have split on various occasions. But they always return to one another because their love is unbreakable. That’s something Shauna realizes, but Quinn can’t accept.

The Bold And The Beautiful Spoilers: Thomas Forrester Not Happy, Finds He Has Competition From Zende https://t.co/e5esfEm6DP pic.twitter.com/dwHl9PxkVP

The Bold And The Beautiful Spoilers – Shauna Fulton Returns Some Day?

It will be interesting to see what happens next with Shauna. Richards has been working on another entertainment project, which meant that Shauna’s truth reveals happened via outdoor scenes with the actor being filmed alone.

Quinn and Ridge communicated with Shauna by video chat, which added a modern twist to what currently looks like this character’s farewell. Hopefully, Richards returns in the near future, as she and her character are delightful.

As for Brooke and Ridge, hopefully, they’ll experience at least a brief period of peace and quiet.