‘The Bold And The Beautiful’ Spoilers: Quinn Went Too Far – Responsible For Ridge’s Divorce 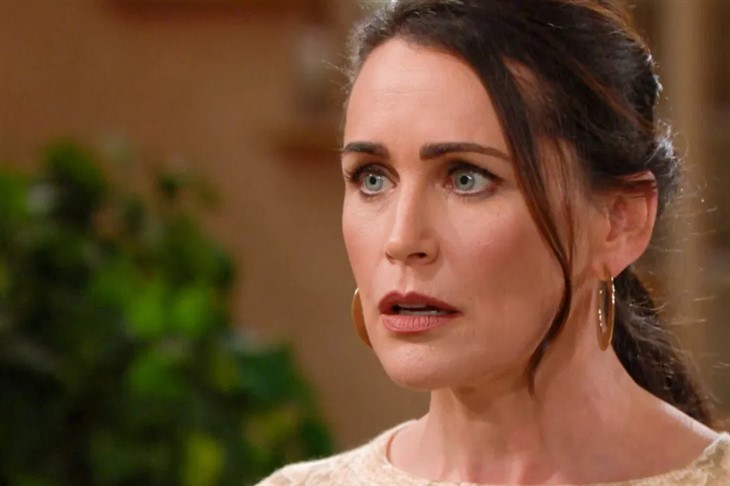 The Bold and the Beautiful spoilers tease that Quinn Fuller Forrester (Rena Sofer) is once again connected to the drama involving a smartphone. After taking her best friend’s device earlier this year, without consent, Sofer’s character has orchestrated another diabolical plan that was aimed directly at destroying Brooke Logan’s (Katherine Kelly Lang) life.

Shauna Forrester (Denise Richards) shocked Ridge Forrester (Thorsten Kaye) by telling him they got married in Las Vegas, Nevada. He was forced to agree that vows were said after seeing photos, but then noted Bridge’s divorce papers weren’t filed.

Carter Walton (Lawrence Saint-Victor) was perplexed when he received Ridge’s text. It said that he should file the divorce paperwork that Bridge completed in the recent past. Being a good attorney and a friend, Carter attempted to double-check by calling Ridge, using his smartphone number.

The call went straight to voice mail. Carter then received another text saying to go ahead. No one can blame Saint-Victor’s character in this instance, as anyone would have concluded that Ridge reached a final, painful decision. His method of communication was likely seen as being part of a resolved demeanor, meaning that he didn’t want to talk about it.

Quinn may merely be the mastermind behind this scheme, as Ridge had his smartphone with him in Vegas. It’s possible that Quinn flew to Nevada and went to Shauna’s apartment, where Richards’ character made sure she’d left her soon-to-be husband’s phone.

But, in all likelihood, Shauna took Ridge’s phone and followed Quinn’s advice. Shauna probably sent the texts while Ridge was out of it, having downed far too many alcoholic beverages.

B&B fans recall that Shauna crossed the first line the night she ran into an inebriated Ridge at Bikini Bar last summer, which was after Carter left. She eventually helped him up to a second-floor room at that location, got him into bed, didn’t do anything outrageous, but did kiss him on the lips while he was unconscious.

Playing off Ridge’s known state of mind while under the influence, Shauna and Quinn created a scenario that began with Carter being digitally contacted. He followed through on filing the legal documents, which made Ridge a single man.

Shauna got Ridge to a wedding chapel on the strip and appears to have coaxed him into completing a binding ceremony. Although, with all that’s transpired, fans want to see full confirmation that the Vegas wedding actually happened.