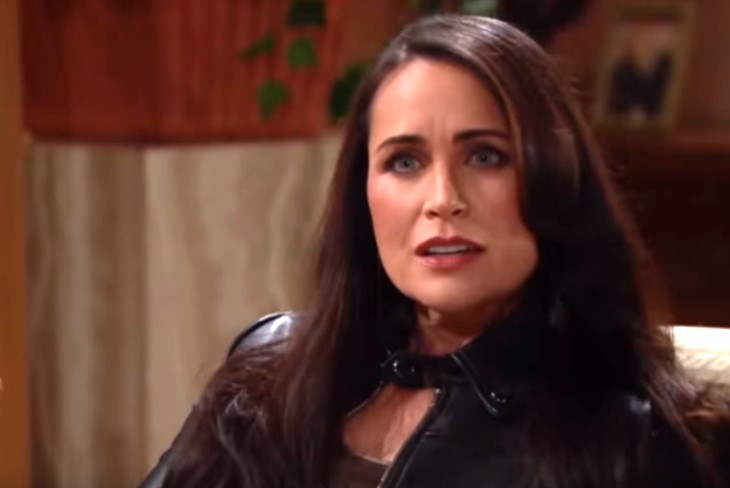 CBS The Bold and the Beautiful spoilers tease that Quinn Forrester (Rena Sofer) will tempt fate, or probably begin the process of sealing it with her verbal victory dance on B&B. Brooke Logan (Katherine Kelly Lang) won’t take kindly to Quinn’s arrogant comments regarding the end of Bridge and the start of Shidge.

But Quinn’s certainty will cover the seemingly inevitable day when Brooke learns the real storyline regarding what actually happened in Las Vegas, Nevada. And with that Quinn will face Eric Forrester’s (John McCook) certain wrath and likely boot out of the mansion and the lush life she feels entitled to.

The Bold And The Beautiful Spoilers – Brooke Logan Provoked Situation

Yes, it’s true that Quinn acted dishonestly in encouraging Shauna Fulton (Denise Richards) to take Ridge Forrester’s (Thorsten Kaye) phone and send texts to Carter Walton (Lawrence Saint-Victor). That caused Carter to file completed divorce papers which made Ridge a single man. Shauna was able to legally marry him in a Vegas wedding chapel due to that realized status.

However, a review of earlier episodes shows that Brooke was caught kissing Bill Spencer (Don Diamont) on a video that Shauna discretely captured. Quinn took that video, without Shauna’s knowledge, and exposed an apparently scandalously Brill reunion.

But if Brooke had stopped Bill cold Shauna wouldn’t have had the opportunity to record anything. And, Quinn wouldn’t have gained the ammunition she needed to knock Brooke out.

Ridge can’t possibly forgive Shauna when he either overhears, is told, or somehow otherwise gains knowledge of the truth. Shauna, not Quinn, used her fingers to text Carter. That alone would be grounds for a break.

As part of the orchestrated plan, Shauna then got Ridge so drunk that he didn’t know where he was, what he was doing, or, to be exact, who he was marrying. So, that union is a sham, legal or not.

The Bold And The Beautiful Spoilers: 5 Reasons Why Thomas And Shauna Could Hook Uphttps://t.co/ateEOfCuip

The Bold And The Beautiful Spoilers – Quinn Fuller Again?

Quinn’s enjoyed the good life since 2016 when Eric married her. She’s been a Forrester for four years and now believes that her efforts have allowed Shauna to gain access to the fold.

But Mrs. Eric Forrester could soon find her world stripped. And who stands as the most likely character to make Sofer’s character Quinn Fuller again? Brooke, of course.

Fans sense that outcome is coming. The intrigue is tied to how and when.