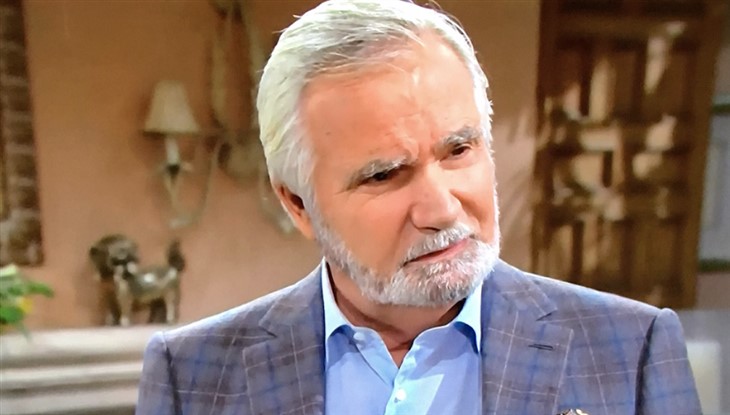 CBS The Bold and the Beautiful spoilers reveal that Eric Forrester (John McCook) is convinced that Ridge Forrester (Thorsten Kaye) belongs with Brooke Logan Forrester (Katherine Kelly Lang). He decides to try and fix the couple’s fractured relationship. The patriarch plays a therapist and tries to reunite “Bridge.” Will he be able to fix “destiny” or has too much damage been done?

The Bold And The Beautiful Spoilers – Eric Forrester is Alarmed

B&B spoilers reveal that Eric isn’t just baffled, shocked, or upset about Ridge marrying Shauna Fulton (Denise Richards). Actor John McCook told Soap Opera Digest that his character is downright alarmed by the news. Eric has nothing against the Vegas vixen but believes that Ridge and Brooke are meant to be together.

“As far as he is concerned, it’s Ridge and Brooke until the end of the world, no matter what.”

Eric doesn’t like how everything has played out. Ridge jetting off to Las Vegas, staying with Shauna instead of a hotel, getting married, and not remembering anything. Eric is also suspicious about the divorce. Something that important would be handled with a phone call, not a text. Plus, Ridge would never bark orders at Carter Walton (Lawrence Saint-Victor).

But it’s not just what happened that is bothering Eric. His gut is telling him that something is not right with how Ridge is acting.

“Something is not right here with how Ridge is feeling. Ridge was caught by surprise, as well. It came out of the blue for him to realize that he is married to this woman now and he’s not able to be with Brooke anymore. Brooke is very confused about it.”

The Bold And The Beautiful Spoilers – Brooke Logan Forrester Is Suspicious

The Bold and the Beautiful spoilers reveal that Eric isn’t the only one who is suspicious. Brooke knows in her heart that this whole situation is wrong. How Ridge is dealing with the issue is really off, as well. The designer was excited about reuniting with Brooke and said he wanted to spend the rest of his life with her. So, why wouldn’t he just get an annulment or divorce? What would make him stay married to Shauna instead of fixing this mistake?

The Bold And The Beautiful Spoilers: Brooke Ready To Fight For Her Man – Shauna Fears Exposure https://t.co/AlovjSMGyU pic.twitter.com/uJwgwxU5gI

Brooke already knows that Quinn Forrester (Rena Sofer) has something to do with this. Eric is also suspicious of his wife. He’s giving her the benefit of the doubt for now, but Eric will find out the truth. We have a hard time believing that Eric will forgive Quinn once again. She went way too far this time.