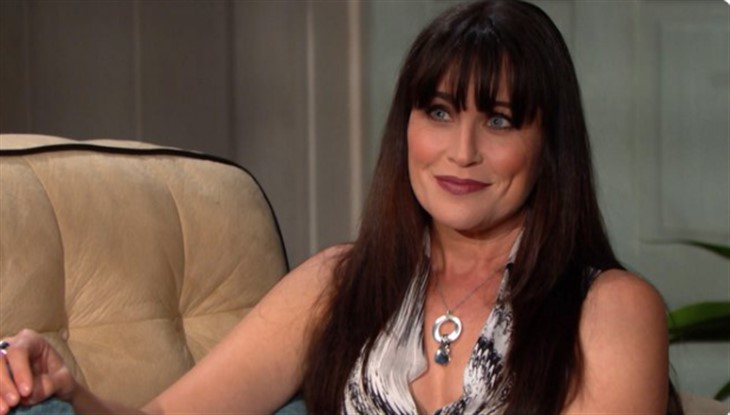 CBS The Bold and the Beautiful spoilers document that Quinn Fuller Forrester (Rena Sofer) remains very happy with herself. She believes that Brooke Logan (Katherine Kelly Lang) has been marginalized and will inevitably be completely pushed out of the Forrester family.

It was possible, though admittedly not certain, that Brooke was going to lose Ridge to Shauna eventually. But Quinn wasn’t willing to wait.

Sensing the opportunity to capitalize on what felt like the perfect scenario, Quinn encouraged Shauna to pretend to be Ridge, when sending the text to Carter Walton (Lawrence Saint-Victor) to file the Bridge divorce papers. That twisted success open the path to the wedding chapel travesty.

Every seasoned soap fan knows that Ridge will surely learn the truth in time. He’ll be primed to have the Shidge marriage annulled, or he’ll at least split from Shauna to consider the situation if he’s fallen in love with her.

If Shauna had told Quinn that she wanted to remain on the right course, which Richards’ character had been, then she definitely would be in a better position than she’s in right now. Yes, Shauna added the Forrester last name to her own, but the victory was won through dishonest means and is hollow.

The Bold And The Beautiful Spoilers – Shauna Forrester Can Redeem Herself

Shauna may still wind up as the former Mrs. Forrester. Brooke could reclaim her relationship with Ridge in the form of another remarriage. But if Shauna has any chance of keeping Ridge in her life, then she needs to enlighten him as soon as possible.

Richards’ character is off-screen for a short period of time, as she’s filming an alternative entertainment project. So, there is a slight Shidge break.

Shauna’s on-screen absence allows Ridge to become involved in Steffy Forrester’s (Jacqueline MacInnes Wood) developing dilemma. But as that’s being addressed, or when it ends, the real story about Las Vegas, Nevada, should be told. Shauna would be wise to follow her conscience, which has been talking loudly to her, rather than Quinn’s self-promoting agenda that jeopardizes both of their marriages and their friendship.