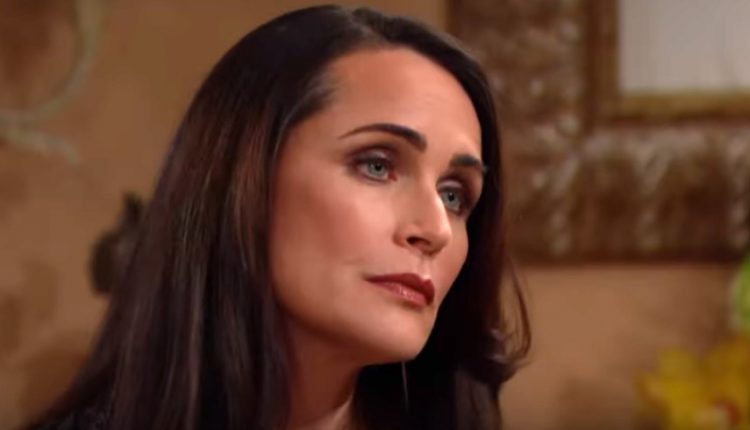 The Bold and the Beautiful spoilers reveal Quinn Forrester (Rena Sofer) has a little chat with Flo Fulton (Katrina Bowden). She encourages the young woman to marry Wyatt Spencer (Darin Brooks) right away, even though he is still technically engaged to Sally Spectra (Courtney Hope). But will she take the advice of her future mother-in-law?

The Bold and the Beautiful Spoilers – Quinn Forrester’s Hope

B&B spoilers confirm Quinn has her own ideas of who Wyatt should be with and she always has. Even when he announced his engagement to Sally, Quinn insisted that her son was making a huge mistake. She felt strongly that he needed to be with Flo and she made that crystal clear to her son.

Now that Wyatt has changed gears once again and returned to Flo, Quinn wants to be sure that he doesn’t bounce back to Sally.

It is revealed that Quinn will have a talk with Flo and push her to walk down the aisle with Wyatt as soon as possible. She encourages this even though Wyatt is still technically engaged to Sally. However, will Flo do as her future mother-in-law wants? Or could she end up conflicted because of the issue with Sally?

The Bold and the Beautiful Spoilers – Wyatt Spencer’s Dilemma

The Bold and the Beautiful spoilers tease that Flo won’t be the only one who is feeling conflicted. So is Wyatt, who learns about Sally’s illness. He will try to be there as a friend, but Sally won’t want anything to do with him. After all, he broke her heart not once but twice and for the same exact reason each time — Flo Fulton.

It is revealed that Sally won’t let Wyatt move on with Flo. However, it is hard to figure out how she is going to stop him. Will it be guilt? Could she play dirty and manipulate the situation to try and force Wyatt to stay? Or will she go after Flo? Fans will have to keep watching the CBS soap opera to see how this storyline plays out.