The Bold And Beautiful Spoilers: Eric Enraged Over Quinn’s Deception, Has He Finally Had Enough? 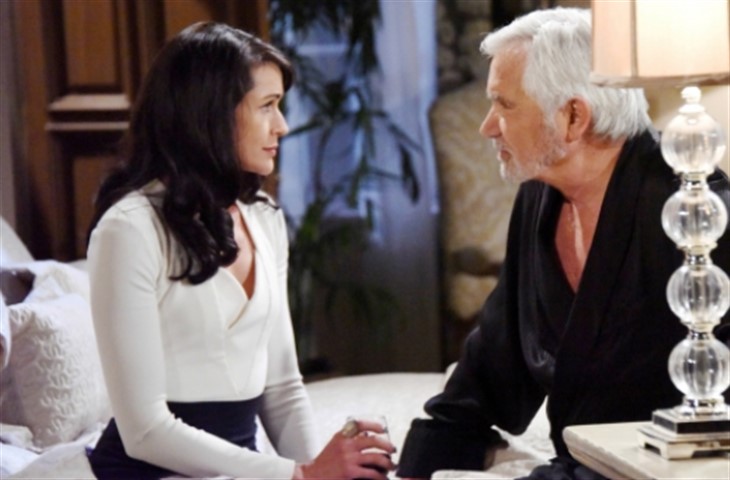 CBS The Bold and The Beautiful spoilers tease that Eric Forrester (John McCook) will be enraged over Quinn Forrester’s (Rena Sofer) deception. Has Eric finally had enough of her manipulations and lies?

Of the Forrester family, Eric will be the last to know. Viewers will recall that Katie Logan (Heather Tom) overheard Quinn on the phone. She was trying to convince Shauna Fulton (Denise Richards) to go through with the second wedding ceremony.

Viewers will recall that Katie heard Quinn talking about sending the divorce request from Ridge Forrester’s (Thorsten Kaye) cell phone to Carter Walton (Lawrence Saint-Victor) from Las Vegas. She immediately ducked out when she saw Eric coming and went to Forrester Creations to tell Ridge! In the meantime, Donna Logan (Jennifer Gareis) was trying to encourage Brooke Logan Forrester (Katherine Kelly Lang) to fight for her man!

Brooke suspects that there’s something fishy about the “marriage” and goes to the Forrester mansion to look for Ridge. Instead, she runs into Quinn! Ridge is already having reservations about going through with the ceremony. Katie cements those reservations when she tells Ridge about what she heard. He decides to take action, but then Shauna decides to come clean with Ridge and calls him.

Carter is already at Forrester so it is reasonably certain he’ll be told what happened as well. Brooke suspects Quinn is behind the “marriage” in Vegas. Brooke will find out that Ridge has chosen her after her tirade at Quinn, when she returns home to find Ridge there. They have a romantic reunion!

Shauna tells Quinn in person that she came clean to Ridge. The marriage is fake, the second wedding ceremony is off, and Quinn tears her apart! Enough details are disclosed in the tirade that Eric quickly figures it out when he hears his wife screaming at her friend! Eric still has feelings for Brooke – which is no big secret – but realizes she belongs with Ridge.

The Bold And The Beautiful Spoilers: Shauna Wants To Tell The Truth – Ridge Willing To Give Marriage A Chancehttps://t.co/UOVf4vlqqq

Longtime viewers or those who watched the months of classic B & B episodes will realize Eric was actually Brooke’s first husband even though she had her eyes on Ridge. He realizes that Quinn had been the main straw that broke the camel’s back of Ridge and Brooke’s relationship! For Eric, this realization that Quinn was making it her life’s mission to break up Ridge and Brooke forever is the straw that breaks the camel’s back of THEIR relationship!

Quinn had promised him that she would work hard to change. That change included not indulging in her dark inclinations of manipulation. He had believed in Quinn and encouraged her in her efforts to change. But now he feels like she has quite possibly been manipulating HIM all along. This may be the end of their relationship forever. As for Quinn, her carefully constructed house of cards is collapsing around her!

Stay tuned to The Bold and The Beautiful, and keep checking B & B spoilers frequently for all the latest news, updates, and developments!

Days Of Our Lives News Update: Camila Banus Proves Why She’s The Best In The Show