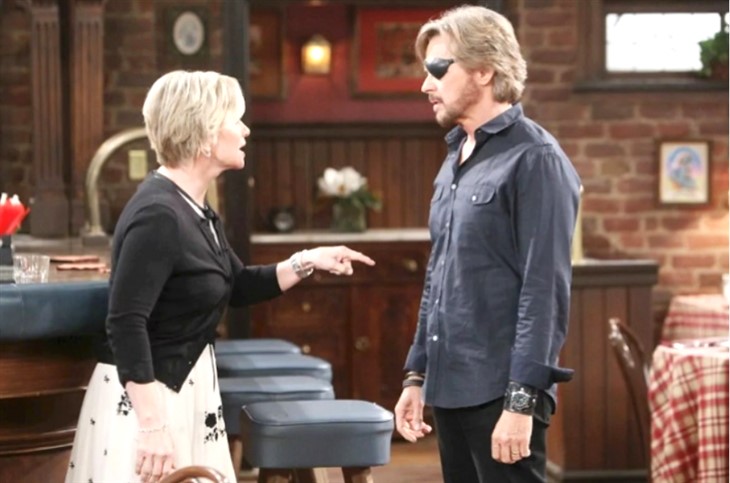 Days of Our Lives spoilers tease that in Salem Steve Johnson (Stephen Nichols) and Kayla Brady (Mary Beth Evans) will continue to argue about Tripp Dalton’s (Lucas Adams) guilt or innocence in the rape of Allie Horton (Lindsay Arnold) in an upcoming episode of Days of Our Lives!

Days of Our Lives viewers will recall that Tripp’s DNA test, to determine the paternity of Henry Horton (Jayna and Kinsley Fox) came out positive! Tripp was blindsided as was his father, Steve! Tripp didn’t like that it was done behind his back; but Steve had calmed him down by explaining it should rule him out as Allie’s rapist since if he wasn’t Henry’s father, he couldn’t be!

Neither of them can understand why it would have come out positive, and the only other person who could have been a match would have been Steve himself! Steve knew he couldn’t have done it, nor would he! But yet, Tripp’s test came out positive! Kayla ran the tests herself, ensuring there could be no mistakes and no tampering.

She trusts the science and knows that Tripp has to be the father – even if he had brought a London roommate’s toothbrush with him by mistake, the roommate’s DNA would have been long gone by now, with Tripp using the toothbrush for over a year! Steve and Kayla’s son Joey Johnson (James Lastovic) has been in prison for the last few years for the murder of Ava Vitali (Tamara Braun). Of course, now we know that Ava’s not as dead as first thought, but Joey couldn’t be the rapist either since he couldn’t be in London and prison at the same time!

DOOL Spoilers – Kayla Trusts The Science, But She Continues To Be Affected By Her Own Experience

Longtime Days of Our Lives viewers will recall that Kayla was once raped by Jack Deveraux (Matthew Ashton) who is Steve’s brother. Jack had been adopted and they never knew of each other until Jack was an adult and came to Salem needing treatment for Hodgkins’ Disease, and later, after a beating, a kidney transplant! It was the transplant that brought to light that Steve, Adrienne Johnson (Judi Evans), and Jack were siblings.

Kayla, a doctor, again, trusts the science of the DNA test, knowing that she did not make mistakes and steps were taken to prevent tampering. The science alone convinces her that Tripp has to be the father, but she also knows what it is like to have been a rape victim! She knows that Allie is convinced Tripp was the culprit, and the paternity test only confirms Allie’s beliefs!

No rape victim enjoys being told that someone – anyone – could not have been her rapist, especially not when DNA was taken and the test proved it! Until science can prove otherwise – Kayla will stick with the science and Steve will stick with the faith in his son’s word, and they will continue to disagree! Chances are, Tripp, like Steve back in the day, will soon find he has another brother he never thought he had and that brother will be Allie’s rapist!