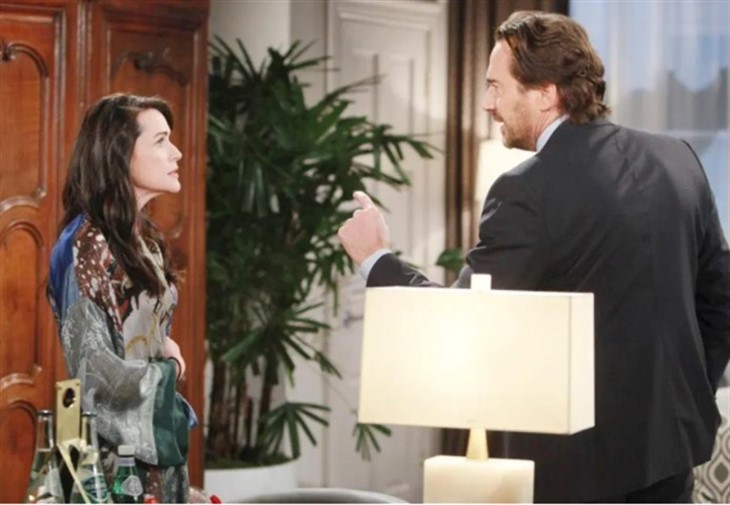 The Bold and the Beautiful spoilers document that Quinn Fuller Forrester (Rena Sofer) believes she deserves a shot at redemption. A plea to her husband and Ridge Forrester (Thorsten Kaye) to forgive her outrageous attacks misses hard.

Ridge is in no mood to forgive Quinn at all. Why would she deserve instant absolution, Kaye’s character strongly asserts? Quinn made Bridge believe it was divorced. Then, she helped to arrange what was actually a faux wedding ceremony to Shauna Fulton (Denise Richards).

The Bold And The Beautiful Spoilers – Eric Forrester Overreacts Or Response?

Quinn is choosing to believe that Eric will forgive her after he’s had time to work through what she’s done. But that outlook is optimistic, if not outright wrong.

Eric isn’t having some dispute with Quinn about a trivial, or even a moderate matter. Instead, he’s responding as many spouses would after learning that his wife totally betrayed his advice and trust.

The fact that Quinn targeted Brooke Logan (Katherine Kelly Lang), saw Ridge as collateral damage, and Eric’s connection to the entire matter as insignificant seems to have revealed something that’s fully unsettling about Quinn’s capacity for real and lasting, personal reform.

Ridge wasn’t okay with Quinn’s ongoing battle with Brooke. But he interpreted that problem as a personality clash. It was much more than that.

As B&B fans know, Quinn and Ridge actually came to care for each other in the relatively recent past. They even kissed, as Brooke famously saw. With whatever those feelings were, Quinn and Ridge didn’t pursue them into a relationship.

Eric’s enormous power of forgiveness allowed Quinn to retain Forrester’s name back then. But this drama appears to be convincing Eric that his past assessments about Quinn were off.

Some people in this version of Los Angeles, California, can’t seem to change. Quinn now appears to have proven that point.

The Bold And The Beautiful Spoilers: Is A Steffy & Finn Baby On The Way?https://t.co/pU7zp8VcH8

It’s true that Quinn loves Eric and that she wanted her friend, Shauna, to have a better life. However, Quinn’s reckless and mindless manipulation of numerous people’s lives fully disrupted her husband’s family and Eric himself. That was totally wrong and has created consequences for Quinn that could be permanent, as her current spouse may soon decide.