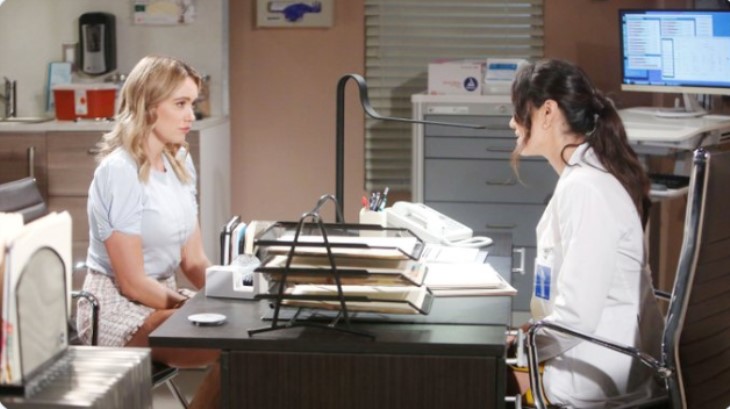 Penny Escobar (Monica Ruiz) has a talent for drawing on ‘The Bold and the Beautiful’. That’s her blessing and may prove to be her downfall.

Dr. Escobar is providing a false terminal diagnosis for Sally Spectra (Courtney Hope) in hopes that her friend and faux patient can provide access to the fashion world, where she wants to be a designer.

Flo Fulton (Katrina Bowden) had a brief glimpse at a career at Forrester Creations. That happened before the Beth Spencer (Madeline Valdez and River Davidson) reveal. Wrong decisions derailed that opportunity, as B&B fans recall.

The Bold And The Beautiful Spoilers – Sketching On Work Time

Ruiz’s character was sketching in her office before Flo knocked on the outside of a closed door. Penny was distracted by her dream, instead of remaining focused on whatever real responsibilities she has at the hospital.

Viewers see one potential endgame for Penny. She’ll lose her unwanted medical license if Flo takes what she saw and is eventually able to make something of it.

Flo wasn’t able to gain the information she wanted when questioning the doctor. Penny wouldn’t respond to Flo’s questions about Sally’s odd refusal to seek any form of treatment, or alternative opinions. So, the secret was temporarily preserved.

Penny claims that she was following her parent’s wishes when becoming a doctor. There’s a comparison that can be made between the direction her life took years ago and the one it’s taking now.

Sally didn’t force Penny to do anything. Instead, Dr. Escobar is choosing to go along with a manipulative request because she sees a means to an end.

The situations are different, as Penny was just becoming an adult while she was pursuing her degrees, completing a residency, and fully securing employment. Now, in her early thirties, she can’t cite parental ties as overwhelming influences.

Penny has free will and could end this farce at any moment. But she hasn’t. Just as Sally wants to reconcile with Wyatt Spencer (Darin Brooks) and is willing to do anything to realize that goal, Penny wants a different career and is opting to break the rules of life to make it happen.

The Bold And The Beautiful Spoilers – Flo Fulton Pursuing Honesty

Flo was wrong in withholding what she knew about Beth being alive. Her acknowledgment in doing so and jail time served affirmed that Flo was regretful and willing to deal with the consequences of what could have been a long sentence. Thankfully, the immunity deal happened.

The Bold and The Beautiful Spoilers: Katie Blasts Donna For Suggesting She Forgive Brooke – Not Going to Happen! https://t.co/u8tLU0Y3v3 pic.twitter.com/MCxRUebbVL

As surely informed by her recent experiences, Flo doesn’t find this situation to feel right. It doesn’t make sense to believe that Sally would be resigned to dying. So why is she?

Questioning Penny was fruitful, though Flo isn’t able to recognize that yet. Her witness of the doctor’s sketch pad was written into the plot as a foreshadowing of what’s to come, as savvy soap fans suspect.