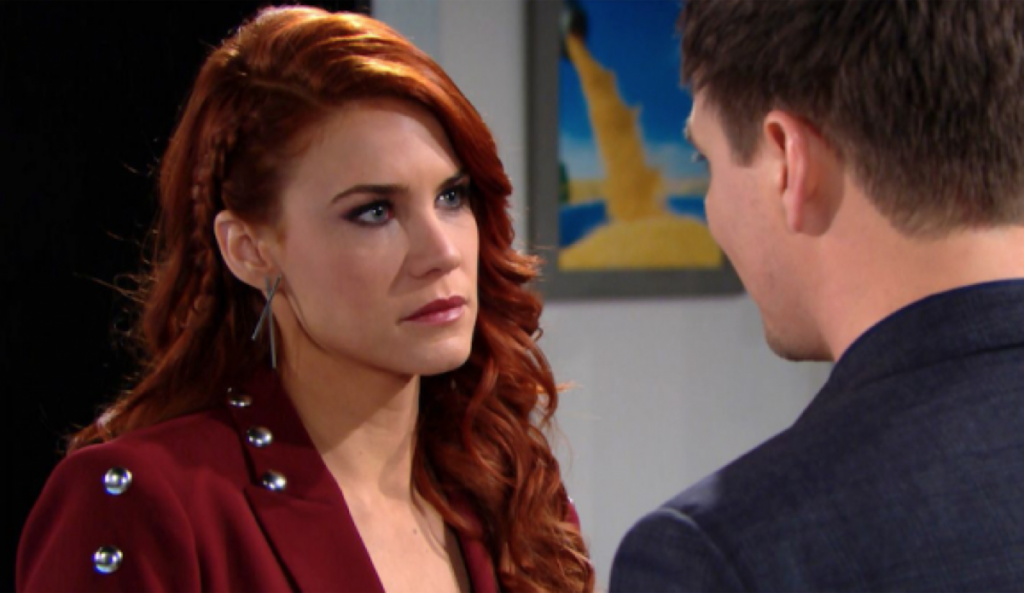 The Bold and the Beautiful spoilers for Friday, January 17, tease that Wyatt Spencer (Darin Brooks) will find himself in an uncomfortable position. He will head home after sharing some kisses with Flo Fulton (Katrina Bowden) at Spencer Publications. As B&B viewers know, he and Flo have just declared their love for each other, and now Wyatt will have to do something extremely difficult…break up with Sally Spectra (Courtney Hope).

Unfortunately, it doesn’t look like Sally is going to make it easy for Wyatt to break off their relationship and engagement. Of course, Sally won’t know what’s just happened between Wyatt and Flo. In her mind, her relationship with Wyatt will be in good standing but will just need a little tender loving care, so it looks like Sally will arrange a romantic setup at home.

That means that Wyatt is going to come home expecting to have a serious relationship talk with Sally, but what he’ll find is his amorous fiancé waiting for him and wearing slinky lingerie. According to B&B spoilers, Wyatt will find himself in the position of turning down a woman in lingerie, and one can only imagine how Sally is going to react.

Of course, B&B viewers can’t forget that Sally has been going through a really difficult time lately. She has been having serious trouble concentrating and designing, to the point where she’s afraid that Ridge Forrester (Thorsten Kaye) and Steffy Forrester (Jacqueline MacInnes Wood) may fire her. Sadly, B&B spoilers indicate that Sally will decide to put Wyatt above her career, just in time for him to dump her.

Next, on Friday’s new episode of B&B, it seems that the fight going on between Brooke Forrester (Katherine Kelly Lang) and Quinn Forrester (Rena Sofer) won’t de-escalate on its own. As B&B viewers know, Brooke and Quinn were in the middle of a fierce argument when Shauna Fulton (Denise Richards) came in the room and Brooke tore into Shauna.

Ultimately, Brooke slapped Shauna, which prompted Quinn to unleash on Brooke and slap her, nearly knocking Brooke to the ground. As Shauna watched in horror, Quinn and Brooke declared war on each other, and it’s on!

Well, on Friday’s B&B episode, Eric Forrester (John McCook) will get himself pulled into the argument as well. It appears that Eric may come home from Forrester Creations to find Brooke, Quinn, and Shauna duking it out and hurling insults. The Bold and the Beautiful spoilers say that he’ll intervene and try to soothe things a bit, but that will probably just be a temporary peace-making attempt on his part.

It certainly doesn’t appear that Brooke and Quinn are going to back down, and a full-scale war seems to be ahead. Brooke’s got in in her head that Quinn and Shauna are hell-bent on ruining her marriage to Ridge, when in fact Brooke is the person who walked out on Ridge in the first place.

And now that Brooke has gone after Shauna again, that might cause Shauna to really turn up her efforts to go after Ridge. After all, Shauna has been fairly tame in making her moves on Ridge so far compared to what she could have done. It’s possible that she’ll join the war and actively pursue Ridge now.

At any rate, we’ll see where this all leads, but it seems that Eric will have a tough road ahead of him since he’ll want to be a friend to both Quinn and Brooke. Ongoing B&B spoilers say that he’ll eventually give Shauna the boot, which is a move that Quinn won’t be happy with at all. In fact, that move might serve to escalate the war even more.

General Hospital Spoilers Friday, January 17: Nelle And Willow Are At Odds – Michael Wants Sasha To Move In – Taggert’s Back In Town, And Sonny Doesn’t Like It