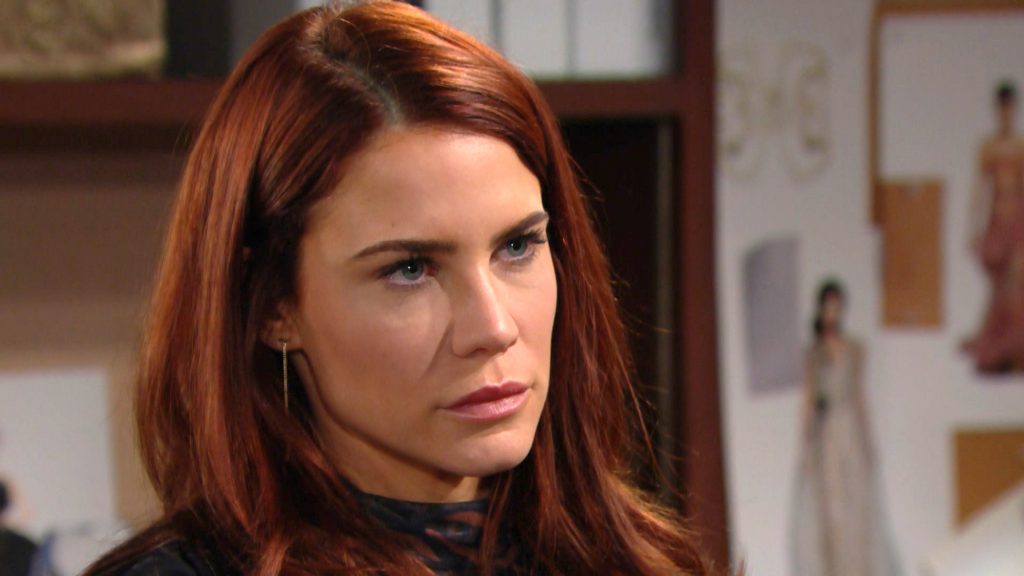 The Bold and the Beautiful spoilers for Monday, February 10, tease that Quinn Forrester (Rena Sofer) will reconnect with Flo Fulton (Katrina Bowden). As B&B viewers know, Quinn has been quite busy lately dealt with a major threat to her marriage to Eric Forrester (John McCook) in the form of Brooke Forrester (Katherine Kelly Lang). But on Monday’s episode, Quinn will focus her efforts on the woman whom she wants to marry her son, Wyatt Spencer (Darin Brooks) – Flo.

As B&B viewers know, Quinn was never really into Wyatt’s relationship with Sally Spectra (Courtney Hope). Sally and Quinn never got along, and now Quinn is happy that Wyatt has dumped Sally in order to go back to Flo. Quinn has always thought that Flo and Wyatt belong together, since they were high school sweethearts and have similar backgrounds.

The Bold and the Beautiful spoilers say that Quinn will talk with Flo, and during their conversation she’ll push Flo to marry Wyatt ASAP. Quinn wants to ensure her son’s happiness, and she’s sure that Wyatt marrying Flo is the right thing for them both. Of course, Flo would probably really like to marry Wyatt, but she might not believe that pushing Wyatt to get married right away is the best move, since Wyatt is still technically engaged to Sally.

Of course, Quinn won’t want to hear Flo’s protests – she just wants Sally as far away from Wyatt as possible and Flo to be with him forever, so she’ll continue to push for Flo to go after Wyatt. At this point, neither Quinn nor Flo will know about the terrible health problems that Sally is having, so they won’t know that Sally happens to be dealing with some serious things that are preventing a formal breakup with Wyatt.

The Bold and the Beautiful Spoilers: Sally Spectra Gets The Worst News Of Her Life

Meanwhile, on Monday’s episode of B&B, Sally will brace herself to hear what Dr. Escobar (Monica Ruiz) has to say. As B&B viewers know, she’s just asked Dr. Escobar what’s wrong with her and whether she is going to be ok. Dr. Escobar has Sally’s test results in hand, and she’ll somberly tell Sally her diagnosis, and B&B spoilers say that it won’t be good news by any means.

The news will probably come as a big shock to Sally, but she probably won’t be surprised that the results are serious. As B&B viewers know, she’s been dealing with some major physical symptoms, including shaking, dizziness, and near fainting. Plus, she called Wyatt by Liam Spencer’s (Scott Clifton) name a while back, indicating that she may have some cognitive issues as well.

At any rate, what Sally’s diagnosis will be remains to be seen, but B&B spoilers say that it will be devastating and life changing. The one good thing will be that Sally will have Katie Logan (Heather Tom) by her side as she struggles to cope with the news she’s just received. Of course, it seems to be in Sally’s nature to deal with things all on her own but having Katie by her side will be of great comfort to Sally, and she’ll really need the support as she faces her new reality.

Of course, Katie knows full well how important it is to have a support network during a serious illness. As B&B viewers will remember, Katie has faced serious health crises in the past, including recently when she nearly died after needing a kidney transplant. She almost didn’t find a kidney in time, but thankfully Flo came through as a donor. Katie knows that without her family’s support, things would have been that much harder.

For that reason, B&B spoilers say that Katie will encourage Sally to reach out to Wyatt after she gets her diagnosis, but that Sally will refuse. Sally won’t want Wyatt’s pity, and she won’t want him to feel like she’s using her illness to get him to stay with her or give her comfort in her time of need. At any rate, Sally’s going to have a tough time during Monday’s B&B episode, as she learns her diagnosis and tries to cope with the terrible news she’s just heard.

Days of Our Lives Spoilers: Maggie Starts to Remember the Accident – Will She Confess and Free Will Horton?